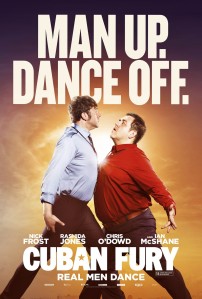 The story starts with young Bruce creating a scrapbook of his achievements in the world of Salsa dancing where he is making his mark and set to take out the only trophy missing from his shelf – “The Finals”.

Unfortunately en route to the championship he is set upon by a group of thugs who force him to eat the sequins hand sewn on his shirt.

He rings his trainer Ron Parfait (deliciously played by career actor Ian McShane) declaring “Salsa is for pussies” and slams down the phone.

We meet Bruce again in adulthood as he attempts to bring his folded up bicycle into work but is thwarted by the security guard at the front desk.

As he argues that it’s “not a bike, but a piece of luggage”, Bruce’s workmate “Drew” (Chris O’Dowd) arrives, giving Bruce a hard time and announcing that a new boss is starting that day.

From here on in it’s a pretty formulaic comedy, albeit one that’s very funny, very heartfelt and ultimately a winner.

The new and attractive female boss – Rashida Jones – is secretly a Salsa dancer, and when Bruce plucks up the courage to confide that he too likes to move to Latin music, she assumes he’s joking and he is crushed.

Nick Frost is not a little fellow, and some of the comedy comes from the ridiculous notion that he could in fact be a Salsa dancer.

But the film aims for much more and deals in a great way with a variety of relatable themes including how we deal with adversity – often by staying within our comfort zone, how we cope with other people’s perceptions of us – by being afraid to follow what we really want to do, and what motivates us to change our way and whether we do that for others, and ultimately how that’s only any good when we do it for ourselves.

Some of the funniest interactions occur between Bruce and his new Salsa mentor – Bejan – Kayvan Novak,  ans well as Bruce and his gang of old mates who take a backseat as he reignites his passion for Cuban heels.

With one key plot point involving a mix-tape, it definitely appeals to a pre-digital music generation. Who among us oldies hasn’t sat and painstakingly created a cassette mix-tape for someone we wanted to impress?