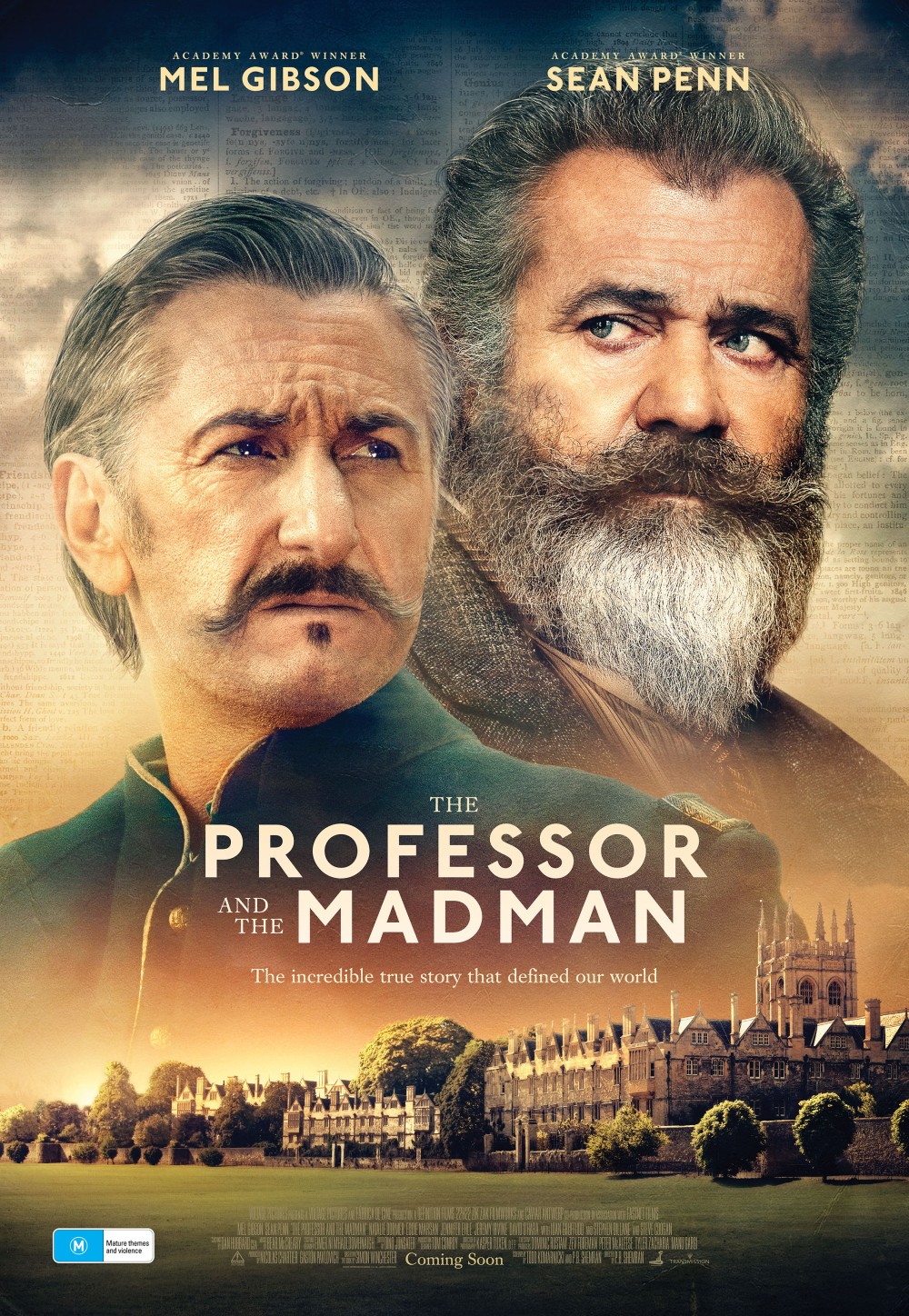 Mel Gibson and Sean Penn are multiple Oscar winners, so you’d back their ability to spot a premium project when they see one. The Professor and the Madman has all the hallmarks of an Oscar-worthy production, in an incredible true story about the difficult birth of the Oxford Dictionary based on the 1998 book by Simon Winchester “The Surgeon of Crowthorne”, and when Gibson picked up the film rights from Luc Besson close to two decades ago, he began work on bringing the story to the screen.

Unfortunately, due to a protracted legal wrangle, Gibson says this of the film, which was originally set to be released by his own Icon label –  “I regret that this film will never be seen as it was meant to be. Making it was never about money for Icon, it was about bringing this amazing story to the big screen. Sadly that has not happened in the way it could have. The Voltage version of this film is a bitter disappointment to me.” More info on the background to the dispute can be found here – https://bombreport.com/yearly-breakdowns/2019-2/the-professor-and-the-madman/

For the time being we have to content ourselves with the version releasing in Australian cinemas. The film opens in London in 1972, with Sean Penn’s character Dr William Chester Minor on trial for the shooting death of George Merrett, whom Minor mistakenly believed had tracked him down with the sole aim of torturing and killing him. (This key aspect of the story to do with Minor’s mental health is explored in greater detail as the film progresses)

Minor is found “Not Guilty” on the ground of mental insanity and sent to Broadmoor Criminal Lunatic Asylum in the village of Crowthorne, Berkshire.

Meanwhile across town, Gibson is doing a damn fine job portraying James Murray, a Scottish lexicographer and philologist – I had to look up the meaning of both these words – using google, not the Oxford Dictionary – and true to his calling, in 1879 he was invited to Oxford to oversee the compilation of a new English Dictionary.

It’s here that we meet Steve Coogan as Frederick James Furnivall a fellow philologist who says to Murray – “Of course we the august delegates of the Oxford University Press have been attempting to make this dictionary for the last 20 years and despite the greatest efforts of a whole army of academics, myself included, we are precisely nowhere…This great tongue of ours which reaches out across the world has drawn its guns, sharpened its bayonets and declared that it will not be tamed”.

What follows is a beautifully shot and superbly acted couple of hours of drama, as we see Murray doggedly pursue his vision to capture and define every single word in the English language, setting up a nifty kind of “Words HQ” in a garden shed, while the Oxford University Press crew need a fresh volume to print and sell on a regular basis, putting Murray significantly under the pump.

He puts out a call to arms for readers across the Empire to help compile the dictionary, sending in words and definitions and quotes that help explain their meanings, and his cry reaches the ears of Dr Minor who has been granted some privileges inside the asylum as he tries to come to terms with his crime.

One of the most striking things about the film is the very decent way that Dr Minor is treated in the mental institution, particularly by one of the head guards Mr Muncie (Eddie Marsan). Muncie is always respectful of Minor, and when the Broadmoor boss subjects Minor to questionable techniques to try and “cure” his madness, Muncie keeps an eye out for the doctor.

Also, George Merrett’s widow Eliza (played by GoT’s Natalie Dormer) has a significant role in the rehabilitation of Minor, and her empathy to Minor’s suffering is instrumental to his state of mind.

The film runs out of money though around the 2 hour mark, and unfortunately proceedings are wrapped up very quickly. The subject deserves better, as does the audience.

There is so much to unpack in this film trying to understand the motivations of both Murray and Minor’s characters and much of the dialogue is challenging to understand, due in part to the accents employed by Gibson, Penn and the majority of the cast, but also due to the language of the era.

Special mention must be made of Coogan who isn’t on screen for long but gets some great dialogue he clearly relishes delivering.

It feels like the filmmakers have had this project stolen from them, and what we are seeing is not an accurate reflection of their labours.