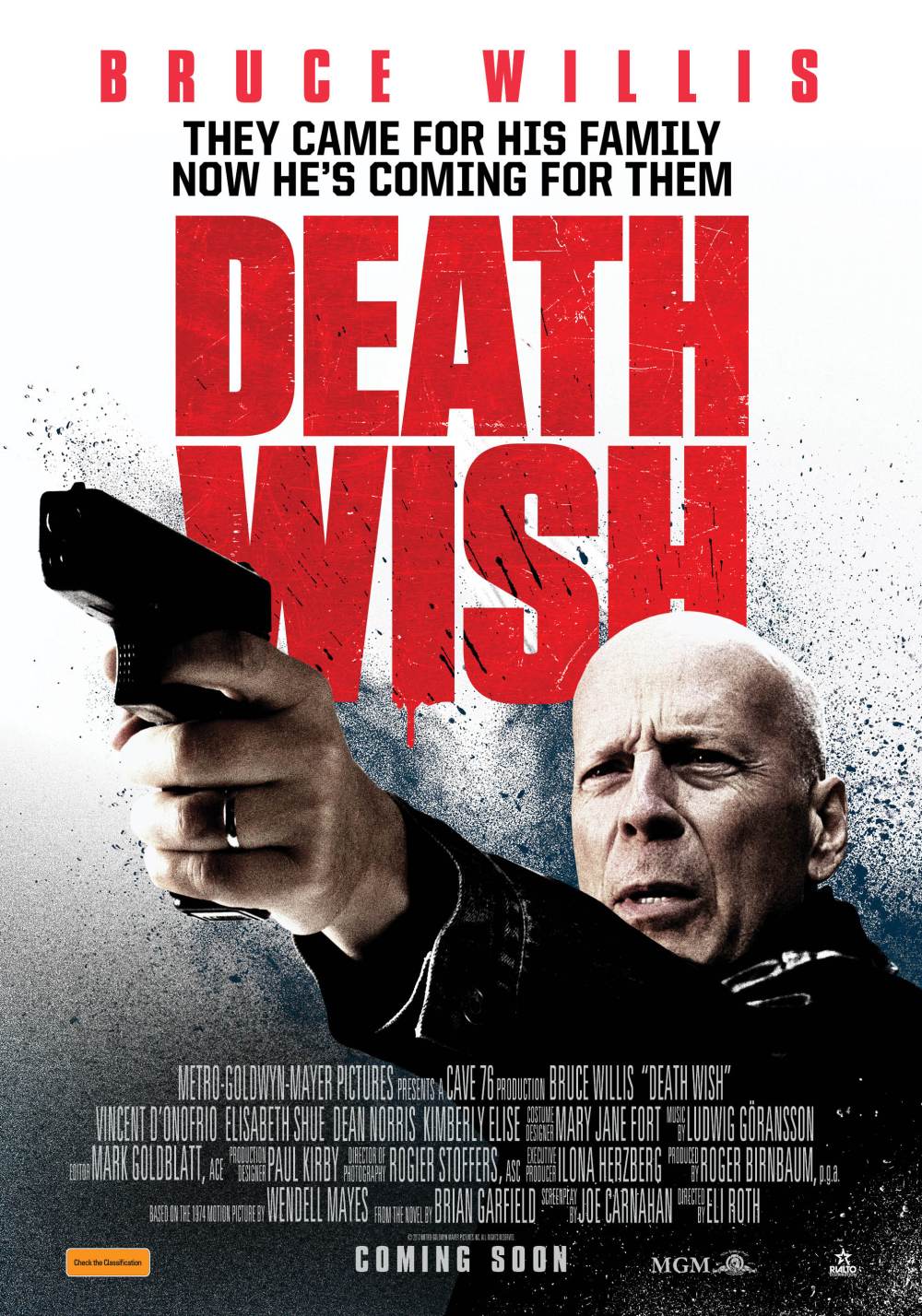 It’s been a helluva couple of years for reboots, revivals and remakes. With Jumanji, The Mummy, Alien and Flatliners just a handful of the film titles to receive an update whether anybody asked for them or not.

Whoever thought we needed a contemporary retelling of Death Wish, a Charlie Bronson classic from 1974 is actually a genius. Given the onslaught of mass shootings in the US, this is a really timely look at that nation’s relationship to firearms.

Instead of an architect who becomes a vigilante killer after his wife is murdered and his daughter hospitalised following a violent home invasion as per the original, Bruce Willis plays the same character – Paul Kersey, but this time he is an intensive care surgeon, meaning his hands are already stained with the blood of gunshot victims.

Willis’s Kersey is a mild mannered fellow, similar to Bronson’s take, but given the bodycount Willis has racked up onscreen over the last few decades we know this tough bald guy is capable of serious bloodshed.

Where this telling deviates from the original in the biggest sense is how it examines the fact that weapons are so readily available to the general public, enabling anyone to carry a firearm after carrying out some basic paperwork and gun lessons.

In the 1974 version, Bronson’s Kersey is gifted a weapon and turns it on the streets after he is wronged by criminals. Willis’s Kersey sees an advert for a local ammo shop and heads to this gun store to be greeted with an arsenal of readily available deadly weapons.

Willis as Kersey goes from being a guy who is OK with backing down from another spectator at a local soccer match, to a man on a mission to kill, a guy with perps in his sights, prone to dwelling in his basement which he has converted into the ultimate Gun-Man-Cave. 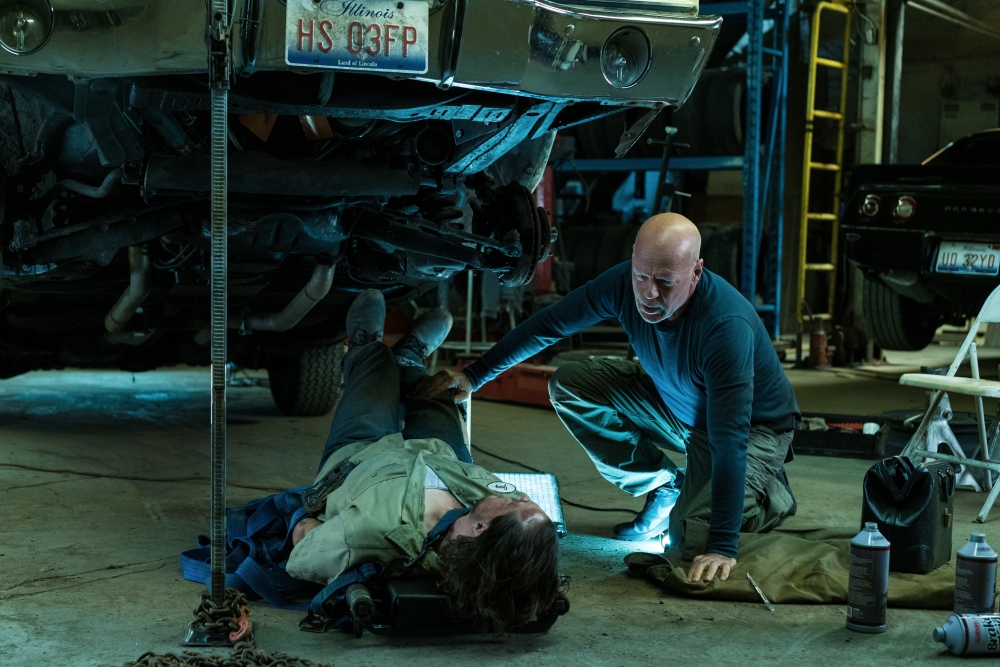 Unlike the original, where Bronson roamed the city streets with a handgun blowing away any punk who pulled a weapon on him, this Kersey actually stumbles across intel that allows him to track down his wife’s killers and he goes after them like a bloodthirsty bounty hunter.

Keeping the satirical tone light are police detectives Leonore Jackson (Kimberly Elise) and Kevin Raines played by Breaking Bad’s Dean Norris (Hank). The pair fail to make much progress in the Kersey case, but when a vigilante (Kersey, unrecognisable due to his attire) is captured on a phone video shooting thugs whilst wearing a hoodie and goes viral, earning the nickname The Grim Reaper, the cops put all their efforts into tracking him down before he can claim any more victims. 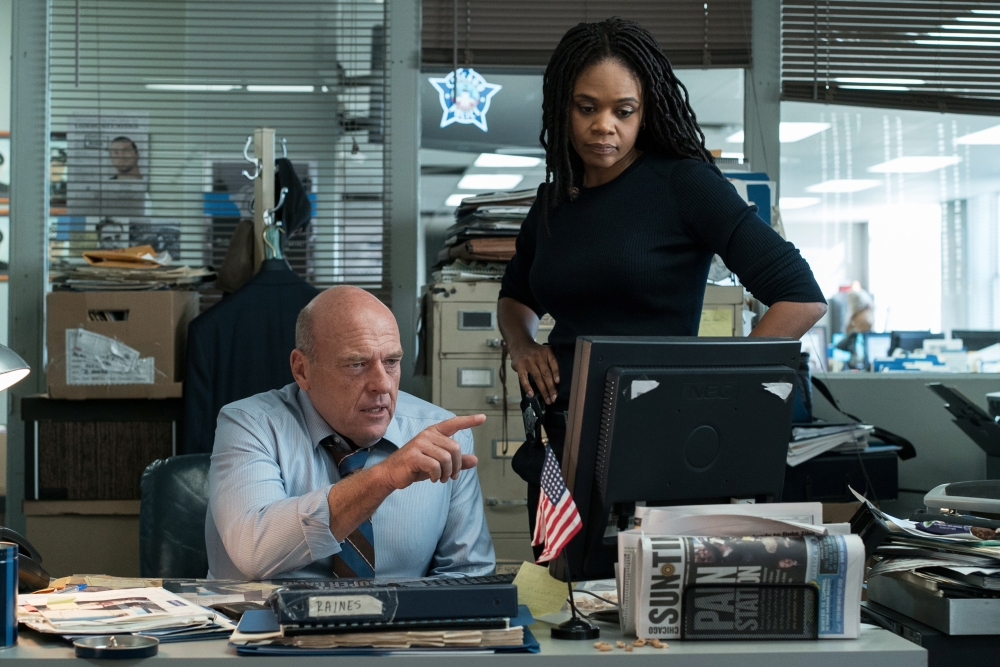 These cop partners are indicative of the overall feel of the film which verges into ridiculous in the most deliberate and delicious ways. There are at least half dozen occasions where the audience at my screening erupted with laughter at throwaway lines designed to illicit such a response.

Meanwhile, callers to the local radio station debate the merits of having an armed man on the streets taking out gang members without regard for the rule of law.

In this way, Death Wish manages to be both a critique of the insanity of U.S. gun laws and a hugely entertaining slice of pulp cinema. The original is remarkable for the fact that Jeff Goldblum plays a gang member, but it is pretty dry and VERY 1974. This new interpretation is VERY 2018 with Willis struggling to grasp the basics of modern technology, (perhaps a callback to his Die Hard character) lamenting that his daughter’s college acceptance offers will come via text instead of a letter. “I miss paper” he says.

For any cinema-goer nostalgic for the “good old days” and keen to escape into the world of a violent revenge fantasy, Death Wish will hit the target.