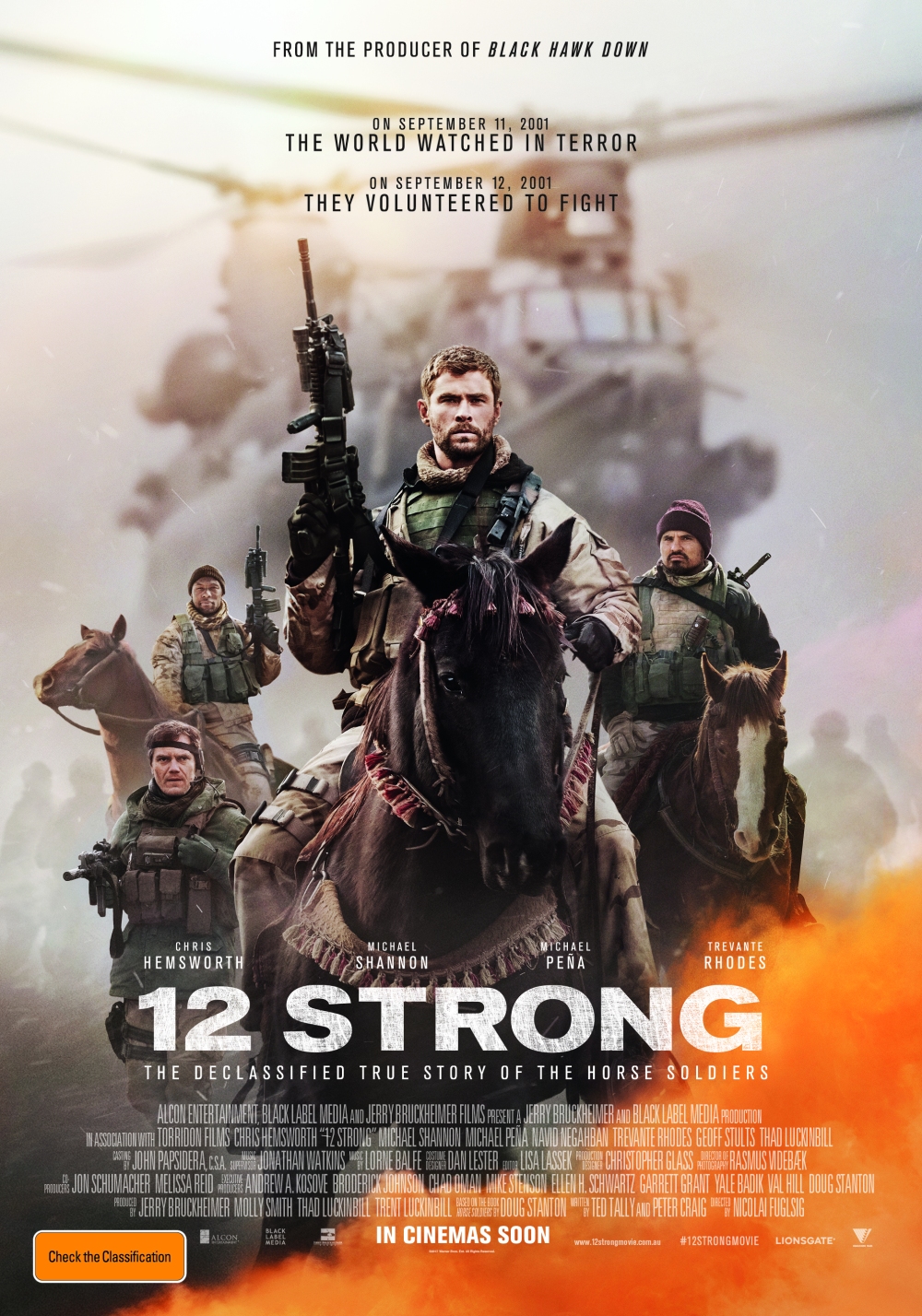 This looks smelly right off the bat and you don’t have to do much digging to see that 12 Strong is unlikely to reach the giddy heights of other 9/11 related films like Zero Dark Thirty, United 93 or even Black Hawk Down (which is referenced on the poster).

According to Wikipedia, “The film 12 Strong is based on Doug Stanton‘s non-fiction book Horse Soldiers, which tells the story of CIA paramilitary officers and U.S. Special Forces, in addition to USAF Combat Controllers, sent to Afghanistan immediately after the September 11 attacks.”

Doug Stanton is responsible for other titles including In Harm’s Way which spent more than six months on the New York Times bestseller list, became required reading on the U.S. Navy’s reading list for officers as well as inspiring a a cheesy looking Nic Cage film directed by Mario Van Peebles (New Jack City)…

The premise of that film reads – “During World War II, an American navy ship is sunk by a Japanese submarine leaving 300 crewmen stranded in shark infested waters.”

In Harms Way proves to be a hugely influential title, as in July 2001, the US Department of Navy, joining with the US Congress, exonerated the ship’s court-martialed captain, Charles Butler McVay. This was a historic reversal of fortune for the survivors of the worst disaster at sea in naval history. In Harm’s Way was credited by those close to the story with helping in this exoneration. So the bar is set pretty high when considering Stanton’s source material.

12 Strong tells the story of the first Special Forces team deployed to Afghanistan after 9/11; under the leadership of a new captain, the team must work with an Afghan warlord to take down the Taliban.

Researching the film I stumbled across an interesting article about a new wave of patriotic films and how flicks like 12 Strong and the 15:17 to Paris were from an outdated era of jingoistic flag-waving. As the article describes, any positives portrayed in 12 Strong are bittersweet, since the war in Afghanistan is still raging 17 years later and the Taliban still controls large swaths of the country.

More on that article –  here.

So, as for 12 Strong, with two great leads in Chris Hemsworth and Michael Shannon, from first time Danish director Nicolai Fuglsig, the film lists writing credits – Stanton as well as Ted Tally (Silence of the Lambs) and Peter Craig (The Town, The Hunger Games) so there is some promise here of a well constructed work.

And there are parts of this movie that are done extremely well, namely a whole stack of nail-biting action.

What doesn’t work so well is the attempt to set up some of the characters and their life at home with their family and how they have to drop everything at a moments notice to serve their country.

This is not work I could imagine myself doing and full credit to the brave souls who serve in armed forces around the world.

In 12 Strong, the USA got kicked in the teeth on September 11th, 2001 and these boys are itching to take the fight to the perpetrators. A mix of Al Qaeda and the Taliban, the bad guys are personified perfectly by Turkish actor Numan Acar (Homeland) as Mullah Razzan, a sadistic Taliban leader who gets around the villages in northern Afghanistan enforcing his interpretation of the Koran, much to the horror of the locals.

If you’ve watched He Named Me Malala, you know Taliban devotees are a) insane and b) don’t fuck around.

Chris Hemsworth starts the film rather awkwardly as Captain Mitch Nelson, kicking over a desk in is office when he learns he “doesn’t have a team anymore”. Thankfully a grim looking Michael Shannon (does this guy even have another look?) as Hal Spencer convinces the army bosses Lt. Colonel Bowers (played by actual United States Marine Corps Reserve Lieutenant Colonel Robert Allen Riggle, Jr.) & Colonel Mulholland (a strangely bald William Fichtner) that Mitch should have a team and they should get themselves over to the Middle East ASAP. 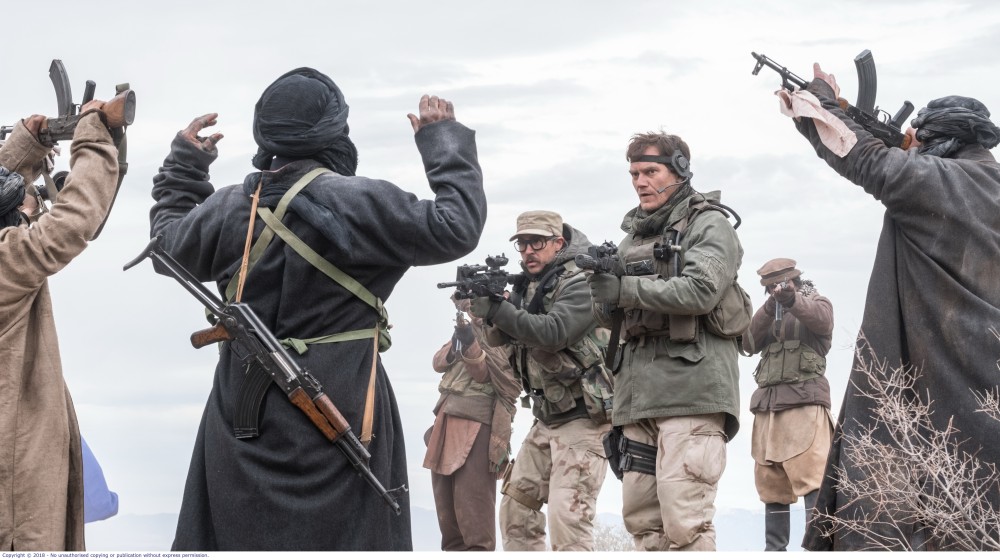 Naturally that’s what happens (ie Mitch and Hal get their wish) and the guys fly to the drop zone in a Chinook helicopter , “higher than one of these birds has ever flown before” (or words to that effect) to team up with a local Warlord played by Navid Negahban as General Abdul Rashid Dostum, who is the leader of the Alliance and later Vice President of Afghanistan.

The film tries very very hard to be excellent, and when it succeeds the action is superbly choreographed and shot, feeling like the combatants are in genuine jeopardy, as opposed ot the CGI universe most film characters inhabit where you know there is no real threat.

Chris Hemsworth as a soldier with no combat experience really comes into his own through the film, developing real confidence and displays believable leadership for his men.

There are some good lines that demonstrate how far over their heads these men were, volunteering to head into Afghanistan on a mission to fight insurgents head-on in enemy territory in the weeks after the Twin Towers came down.

This truly is an incredible true story, and the filmmakers have done justice to many aspects of the participants. I feel perhaps that the horseback factor took a back seat to proceedings which is a shame as that aspect of the events is fascinating.

Fans of first person shooter video games such as Call of Duty will most likely enjoy this one.