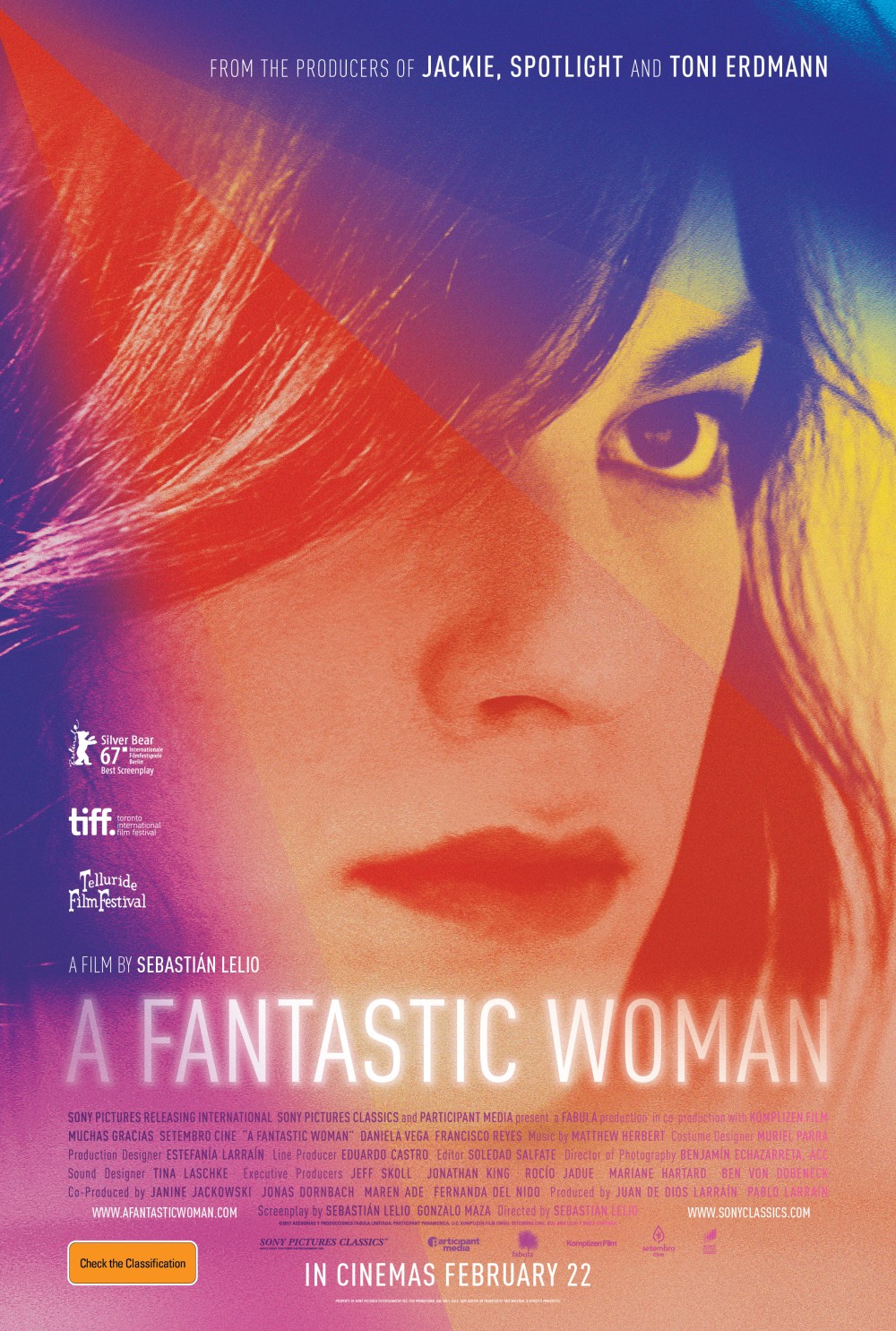 “The exquisite tale of a transgender woman mourning her lost lover from red-hot Chilean filmmaker Sebastián Lelio (Gloria). Santiago bar singer Marina Vidal, played by sensational trans actress Daniela Vega in her screen debut, is headstrong, vivacious, confident and beautiful. After her much older lover, Orlando (Francisco Reyes), dies suddenly, Marina wants to grieve just as anyone would. When met with suspicion and prejudice by authorities and Orlando’s family, Marina boldly steps forward to expose the banality of intolerance and prove that she is, indeed, a fantastic woman.”

Chilean director Sebastián Lelio says “I think that the film communes intimately with its character’s identity. In Spanish, the word that is used to refer to sexual identity is the same one that is used to allude to narrative style: genre. In this sense, the film itself is “trans-genre”. It’s a romance film, a ghost film, a fantasy film, a film about humiliation and revenge, a document of reality, a character study. The identity of the film itself fluctuates, it doesn’t set, it doesn’t stop, and it refuses to be reduced to one single thing. The fact that it can’t be explained in any single way is perhaps one of A FANTASTIC WOMAN’S most contemporary aspects.

One of the amazing attractions of watching a film is the medium’s ability to allow you to experience what it is like to walk in somebody else’s shoes.

Many of us like to follow in the footsteps of superheroes, or secret agents, or take a voyeuristic tour through the lifestyles of the famous, infamous, glamorous or wealthy even if the experience lasts just a couple of hours.

We can also look through another’s eyes to experience a life we may prefer not to live.

Soldiers, first responders, lawyers, prostitutes, criminals, extremists, fanatics or just downright unpleasant characters populate our screens and it is fun, and in some cases educational, to see what it might look like to lead a life like theirs.

It is wonderful to break out of our comfort zones when we go to the cinema to experience something we would never think to imagine.

In the case of A Fantastic Woman, we get to see how a transgender person is treated in the aftermath of her lover’s untimely death.

In her feature film debut Chilean singer Daniela Vega plays Marina Vidal. Hers is a performance that grows more confident every minute she is onscreen.

Her lover, Orlando (Francisco Reyes) runs a garment factory and he is thoroughly smitten with her. Divorced with a couple of kids, Orlando has shacked up with Daniela and they are deeply in love.

After celebrating Marina’s birthday, Orlando wakes up in the middle of the night short of breath and feeling unwell.

In her rush to get him to the hospital, Marina leaves the car keys inside their apartment and dashing back inside to grab them she leaves Orlando in the corridor where he tumbles down a flight of stairs.

Unable to be revived upon admission to hospital, Orlando dies and Marina is treated with awkward suspicion as the medicos are unsure of her relation to the deceased, and the fact that the fresh corpse has suffered injuries as well as an aneurysm.

Marina steps outside to call Orlando’s brother Gabo who agrees to come to the hospital to make arrangements.

Understandably distressed by the evenings events involving Orlando and now also dealing with being judged by the medical staff, Marina sets off on foot into the night.

Just blocks away from the hospital she is picked up by a police car “for suspiciously leaving in a hurry” and returned to the hospital where she meets Gabo, who treats her with kindness and respect

Sadly, he is the only family member of Orlando’s to see Marina as just a person rather than an oddity.

Ex-wife Sonia takes particular offence to her ex-husband’s choice of partner and uses the occasion of Marina returning Orlando’s car to unload her thoughts on the paring.

“I’ve been wondering how you look for a year. I can’t imagine Orlando being with you. I’m sorry if this is crude and blunt, but I think this is perversion. When I look at you I don’t know what I’m seeing.”

Sonia goes on to describe Marina as a chimera, a chimera being a fire-breathing female monster with a lion’s head, a goat’s body, and a serpent’s tail or a thing which is hoped for but is illusory or impossible to achieve.

Marina responds “Don’t worry ma’am you’re normal.” And walks from the car park to the lift where the two women share an uncomfortable elevator ride during which Sonia urges Marina not to come to the funeral for the sake of her 7-year-old daughter.

A Fantastic Woman repeatedly uses an aquatic motif through images such as waterfalls, fountains, a car wash and steam in a sauna so that I wondered if the name Marina also referred to a calm port in a storm.

Marina was everything to Orlando, and now that he is gone, Marina is reduced to nothing in the eyes of his family who are unable to come to terms with the idea of him being with her.

There are two particularly poignant pieces of music in the film – firstly when Marina sings a song called “Periódico De Ayer” (Yesterday’s Newspaper) to Orlando in a club and we see genuine chemistry between the pair of lovers, and at the very end of the film when she steps onstage to sing an Italian aria “Sposa son disprezzata” (“I am wife and I am scorned”).

Marina has not yet had an operation to complete her gender transformation and it is a question that is not appropriate to ask. Naturally it is asked of her. Similarly, her ID papers are still in the name of Daniel, and some people insist on referring to her as sir.

Complicating matters is a female detective from the sex crimes squad who turns up at Marina’s waitress gig concerned that Marina ran away from hospital.

She wants to now if Orlando was paying her and insists on a medical examination to make sure Marina was not sexually assaulted (giving her a motive to murder Orlando).

Marina keeps seeing Orlando as the film progresses, turning up in the shadows, and with his family preventing her from attending his funeral, she is unable to experience the full range of emotions associated with the grieving process.

Thematically and visually suggestive, A Fantastic Woman is a feast for the senses, subtly provoking us to imagine what life must be like for Marina, not to feel sorry for her, but to empathise with how she must be feeling when those around her cannot.

When she learns the details of the wake and turns up uninvited and unwanted, she chastises the family – “Saying goodbye to a loved one it’s a basic human right isn’t it?”

Through a mesmerising sequence of events including a scene in a nightclub that turns into a full on choreographed number and an amazing shot of wind trying to blow her over on a rainy street, Marina travels to the funeral, where, arriving too late for the service, she makes her way behind the scenes, where Orlando guides her to a back room.

There she finds his body on a trolley awaiting cremation. She holds his hand and sheds tears, finally able to say goodbye.

Back in her new, cramped apartment with the couple’s dog Diablo beside her on the bed, Marina looks down at her crotch which is obscured by a small mirror. In it she sees only her face.

She makes her way to a concert hall where she ends the film onstage singing the aforementioned aria in the voice of an angel.

An immensely thought provoking and compelling piece of cinema, A Fantastic Woman is “A Profoundly Empowering Film” – 4 Stars.