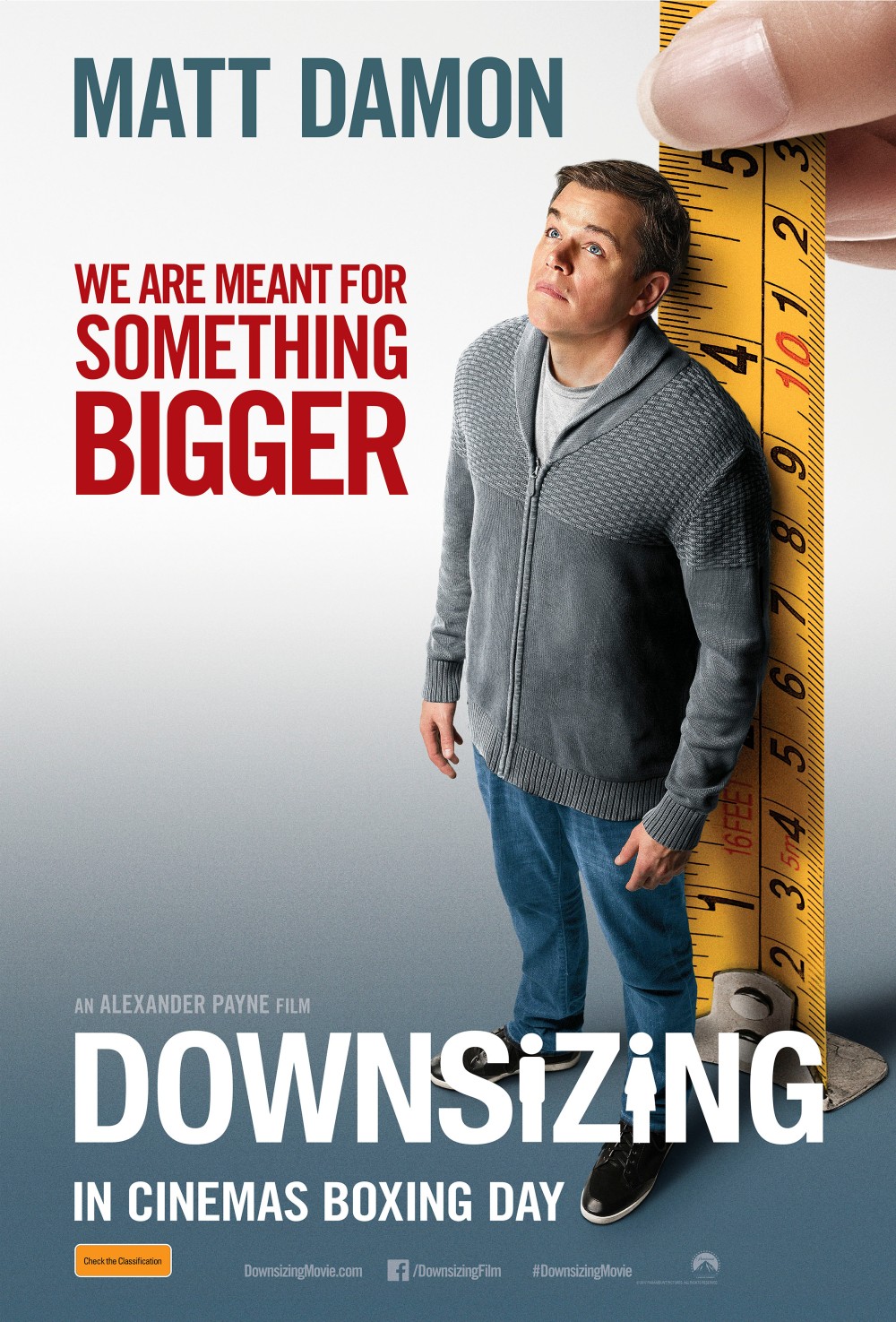 I feel an enormous amount of love for this feature film from Nebraska and Descendants director Alexander Payne that is ironically  about tiny people living in a tiny societies.

Matt Damon and Kristen Wiig are married couple Paul and Audrey Safranek  (a name that get mispronounced for comedic effect throughout the film). Two super average Americans, they make the big decision to undergo Downsizing – a radical new treatment that has been invented by a pair of Norwegian scientists whereby a human being can be reduced in size by about 2000%, so a 6 foot person will become the size of a 5 inch action figure.

Ostensibly marketed as an environmental solution to the global crisis of the imminent collapse of our ecosystem due to overpopulation, “Downsizing” has an added benefit courtesy of economy of scale.

A modest wealth in normal terms becomes a much larger figure in the small societies that are springing up around the globe.

When the big day comes and the husband and wife head to the processing facility to start their new lives, things don’t go quite to plan. leaving Paul in a predicament.

With his dream of living a comfortable life of relaxation and indulgence in “Leisureland” in tatters, Paul crosses paths with Dusan Mirkovic (played by  Christoph Waltz), a partying neighbour in his new community who introduces Paul to a different way of seeing things.

it is through Dusa that Paul meets the person that the film really centres around –  Vietnamese dissident named Ngoc Lan Tran – who has been shrunk by the government against her will and smuggled out of her country in a TV box.

It is the actress  Hong Chau as Ngoc who steals the film completely with her amputated limb and can-do spirit as she captivates Paul and puts him on a new path in their tiny world.

The film is wonderfully written, and serves a as reminder that Payne is already a two-time winner of the Academy Award for Best Adapted Screenplay thanks to his work on Sideways and The Descendants, which along with Nebraska, have sen him nominated for Best Director three times.

Paul has everything required to make his story believable set up perfectly in the opening of the film, from caring for his mother and his wife, to his anxiety to make other people happy, he is a wonderful character to interact with Ngoc. Also, Matt Damon with a “Dad-Bod” is a comforting sight.

Hong’s pronunciation gets a bit of getting used as it feels almost racist when she first starts talking, but her manner of dealing with people is genuine and she anchors the film, really shining in a pivotal scene when Paul and Dusan explain that they need to travel to the original Small colony in Norway without her.

Her response to their patronising explanation had me in tears, and from there I hung on every word she said, and every look she gave. I fully expect her to receive a nomination for Best Actress at the Oscars.

Downsizing is a perfectly crafted and sublimely surreal end of the world comedy that manages to make a commentary on our apathy about the environment, but also makes a point to slip in a joke to keep things light whenever it steers into heartfelt territory.

Filmed in Omaha, Nebraska as well as LA, Toronto and Norway, this is for anyone who ever watched the hippies play their bongos on the beach at Byron Bay and wondered how much of that lifestyle was about saving the planet and how much is about escaping the “real world”.

A Pixar film for grown ups, it entertains while also delivering a payload of messages that will hopefully leave you a changed person after seeing it on the big screen.

5 Stars. “A Great Thing in a Small Package”