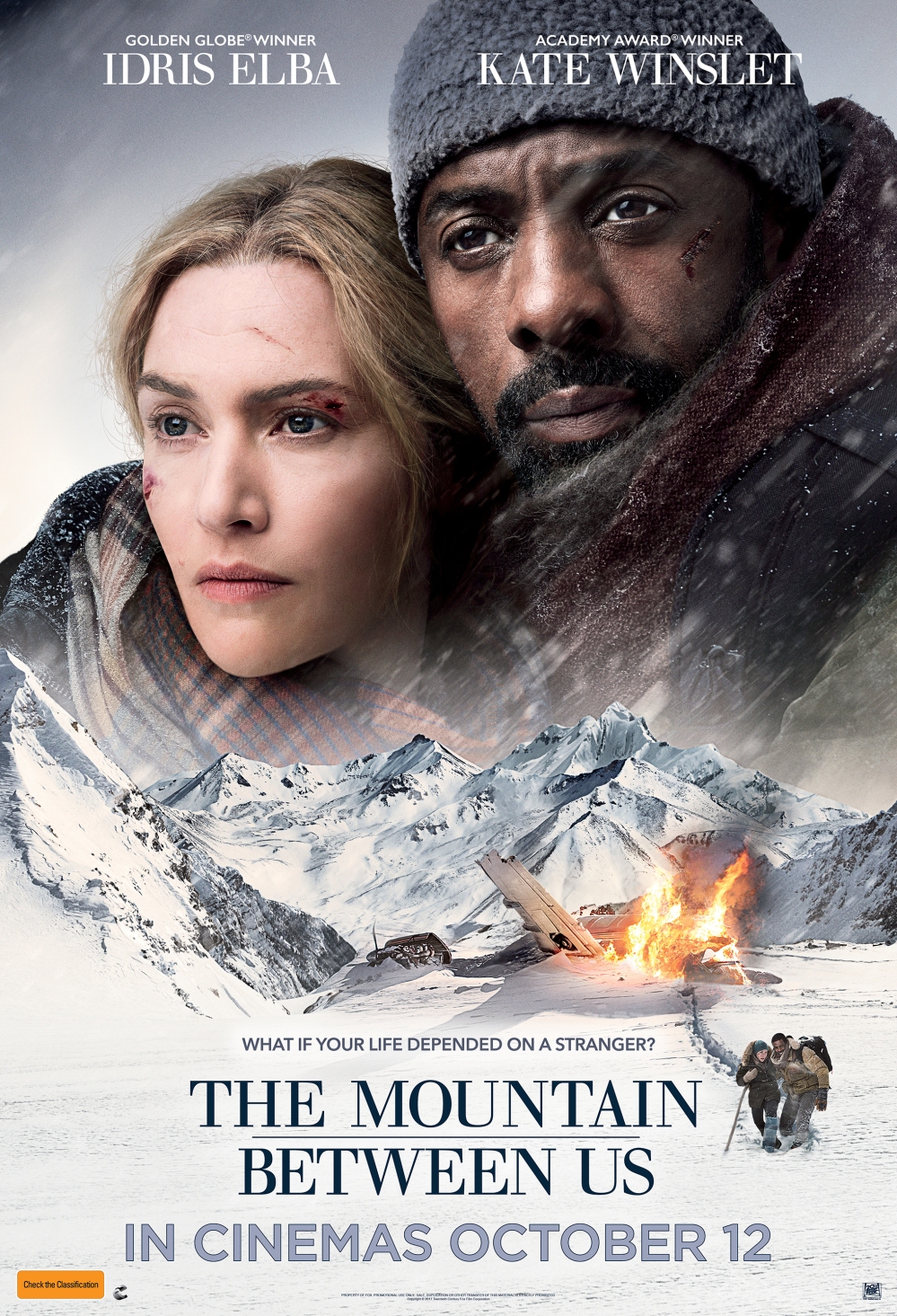 Written by Chris Weitz and J. Mills Goodloe, based on the novel of the same name by Charles Martin.

Idris Elba and Kate Winslet star as a surgeon and a journalist, respectively, who survive a plane crash and are stranded in High Uintas Wilderness with injuries and harsh weather conditions. 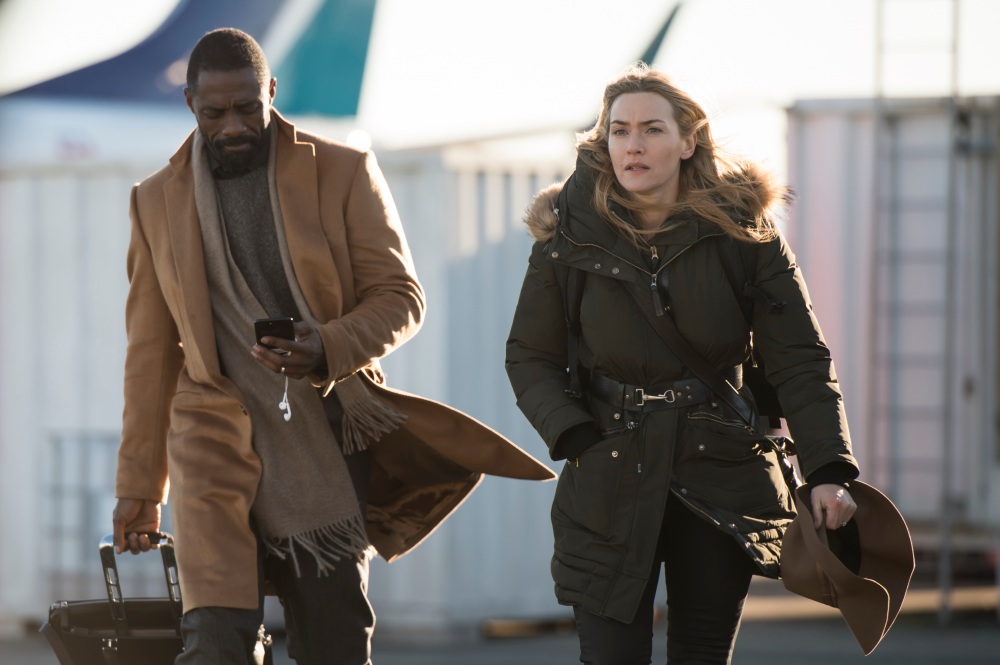 Here is a film that contradicted my expectations. I figured I’d be getting a soppy story about two plane crash survivors who struggle to overcome impossible odds. And sure, while that is the primary component in the film, it is the sparring chemistry between the two leads that carry the film through any hiccups in storytelling.

In a bold and smart piece of plotting, The Mountain Between Us gets straight to the business at hand.

Kate Winslet is Alex Martin. A photojournalist with a wedding to get to – her own.

Idris Elba is Ben Bass. A neurosurgeon with a 10 year old patient in a critical condition waiting in a operating theatre in a another city.

The pair are on the same commercial flight to Denver (then onto JFK) which gets canceled, and the only chance to make their connecting onward flight is to charter a small plane to get to Denver.

With a snowstorm on the radar, it is a risky decision, and when their light plane encounters problems before crashing into the side of a mountain, clearly it would be a miracle if they could survive the impact. And a pretty short movie if they didn’t.

Turns out the impact is the least of the pairs problems as the small aircraft crash lands leaving them with a variety of injuries, but more importantly stranded in the middle of nowhere.

The two character’s personal stories unfold as they huddle together in the shell of the plane debating whether to wait for a rescue or attempt to try to make it off the mountain themselves.

The small details in Ben & Alex’s backstories, along with the little quirks the actors have given their characters make the film more believable than it would be in the hands of lesser performers. Ben is afraid of flying and plays Candy Crush on his phone to soothe the “reptile part of his brain”. Alex has been “shooting skinhead neo-Nazis for The Guardian”. As they forage for food in amongst their belongings after crashing, Ben tells Alex they have some cookies to eat. “What kind of cookies?” she asks, as if that actually mattered when starving to death is a very real possibility. In another scene as they explore their surroundings one says to the other, “I’ll grab you a coffee while I’m out”.

These drops of humour in such a serious story amplify the humanity of the pair as they struggle to maintain their composure in the biting cold.

With no sign of help and supplies running out, they have little choice but to attempt to make it back to civilisation before freezing to death. 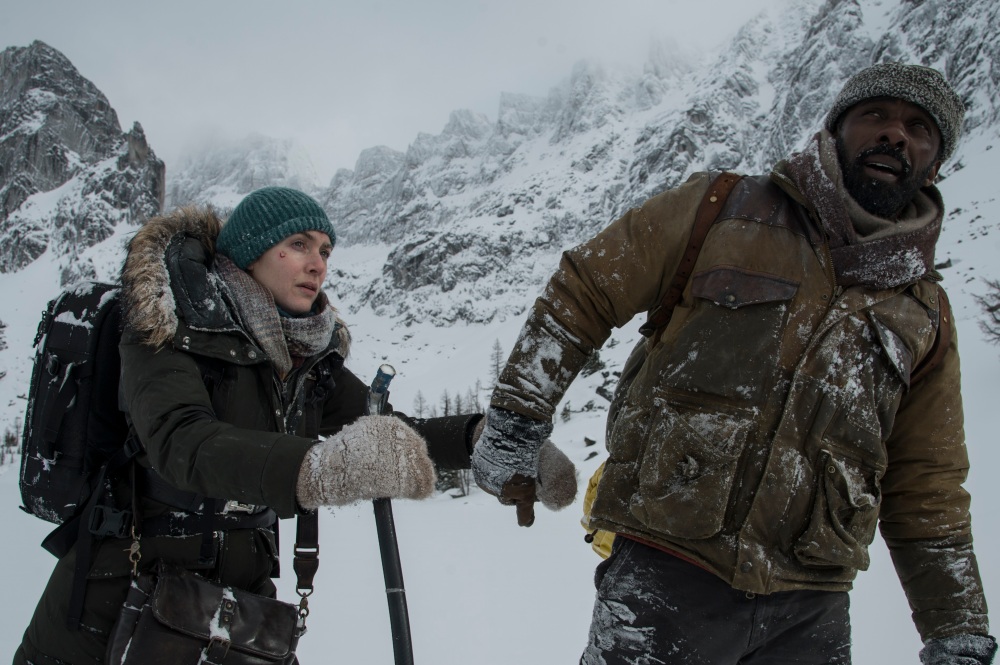 Once they decide to leave the plane wreck, the film moves from an intimate portrait of these two great acting talents to reveal the magnitude of the terrain they are up against.

Australian cinematographer Mandy Walker allows the landscape to become the final character in the film, up til now in the background, before being seen in all its enormous, terrifying glory.

Having shot amazing desert landscapes in Tracks and Australia amongst dozens of credits, Walker shoots the wilderness in such a way that you can’t help but be drawn into the couple’s struggle to survive against this deadly adversary.

In the vein of other compelling films with a limited cast including Cast Away and All Is Lost, The Mountain Between Us uses the twin talents of Elba and Winslet to keep us hooked to see if either character can make it off the mountain and what might happen to them if they do.

Beautifully shot, these two stars light up the screen under harrowing circumstances and it reminded me that I really loved Winslet in The Dressmaker.

I was surprised how much I was drawn into the film, and was hanging on the outcome literaly on the edge of my seat til the final credits.