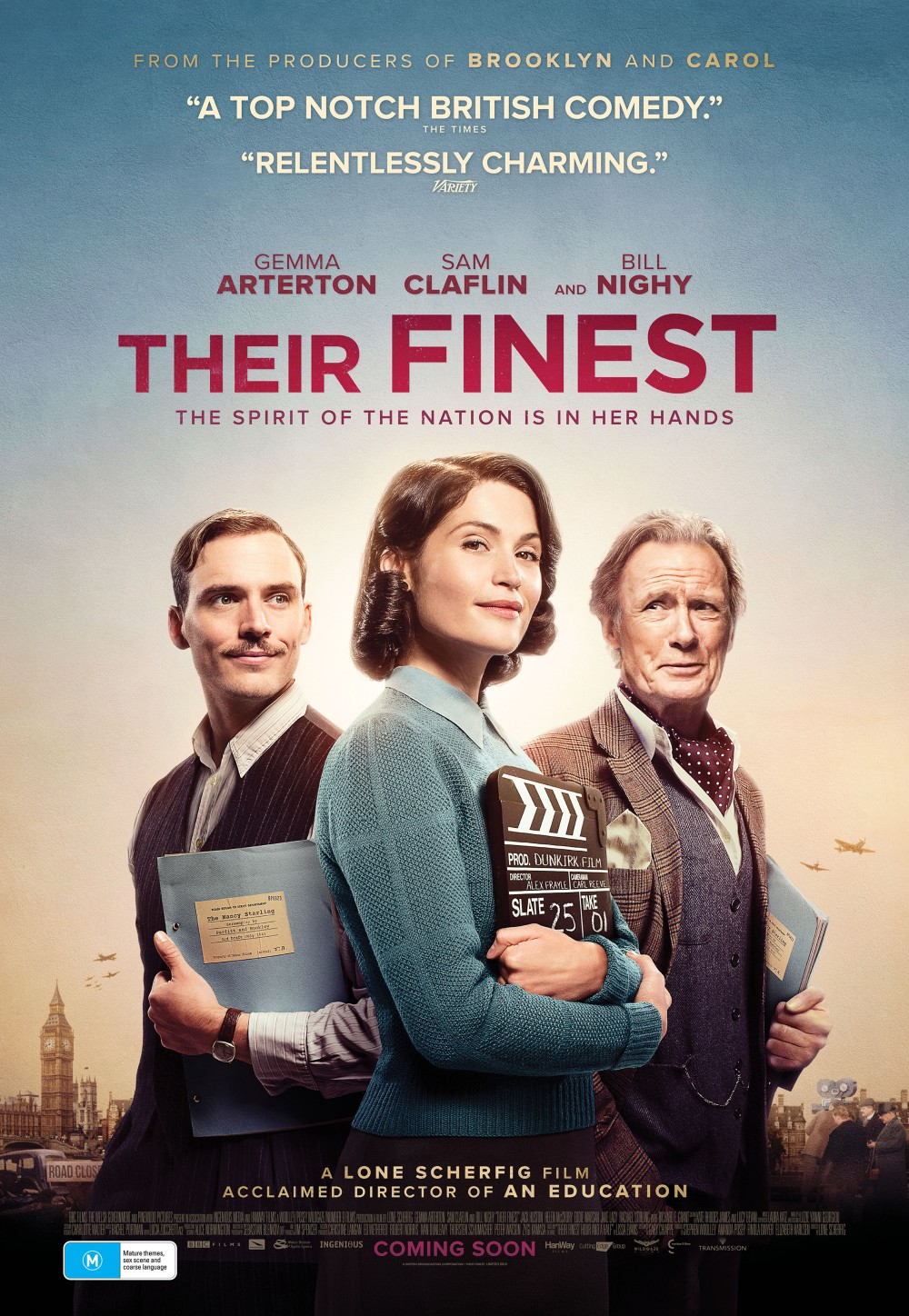 It’s funny how an actor’s previous roles inform our ability to connect with their subsequent identities.

Take Gemma Arterton. Her Bond Girl status (not to be mistaken for Hayley Atwell the WW2 era pin up in the Captain America films), makes me think “British, Military, Attractive” when I see her face onscreen.

And so in “Their Finest” (based on the book Their Finest Hour and a Half”), Arteron plays Catrin Cole, an fetching secretary who accidentally lands a gig as a screenwriter for the British War Office in 1940, hired to bring some much needed spark into the nation’s wartime propaganda films.

Her artist husband Ellis (Jack Huston) has been wounded in the Spanish war and his bleak artworks are on display throughout their cramped London flat.

Catrin senses the opportunity to make a name for herself when she is tasked with interviewing a pair of female twins who have, according to a newspaper report, taken it upon themselves to serve their country by nicking their father’s fishing boat and chugging over to Dunkirk to assist in the evacuation of soldiers (itself the subject of another film later this year from Christopher Nolan.)

The girls, and the facts surrounding their story aren’t exactly movie material, but in Catrin’s hands she cooks up a more stirring scenario that sees a feature film commissioned and she sets about bringing her vision to the big screen.

Assisting her is brusque writer Tom Buckley (Sam Clafin) who while speaking harshly to her at every possible opportunity, also offers a guiding hand to help navigate the tricky miefields of politics with the home office and film-making.

Thanks to a solid script and cast Their Finest is a very watchable film and delivers some truly memorable scenes and lines including how men are behaving belligerently at the thought that when the war is over “women won’t go back into their boxes”.

Bill Nighy as Hilliard, a reluctant performer cast as the twin’s drunken father/uncle fits in perfectly with this English picture. If you enjoy seeing either Nighy or Arterton in a film then this will be a treat for you. If you like both of them then you may well be in heaven.

At one point the Dunkirk film is seen as a good way to encourage the Americans to join the war and this leads to some wry observations about the different things a Yankee audience expects from their flicks.

A recurring motif within the film is Buckley’s advice to Catrin that her writing is too long and she should lose half of it. “ Which half” she asks? “The half you don’t need” is the response. This film would have benefitted from heeding that advice by trimming some of the fat to offer a snappier running time than it’s 117 minutes which do make it feel longer than is required.

All in all though it is “A Jolly Good Picture”. 3 Stars.