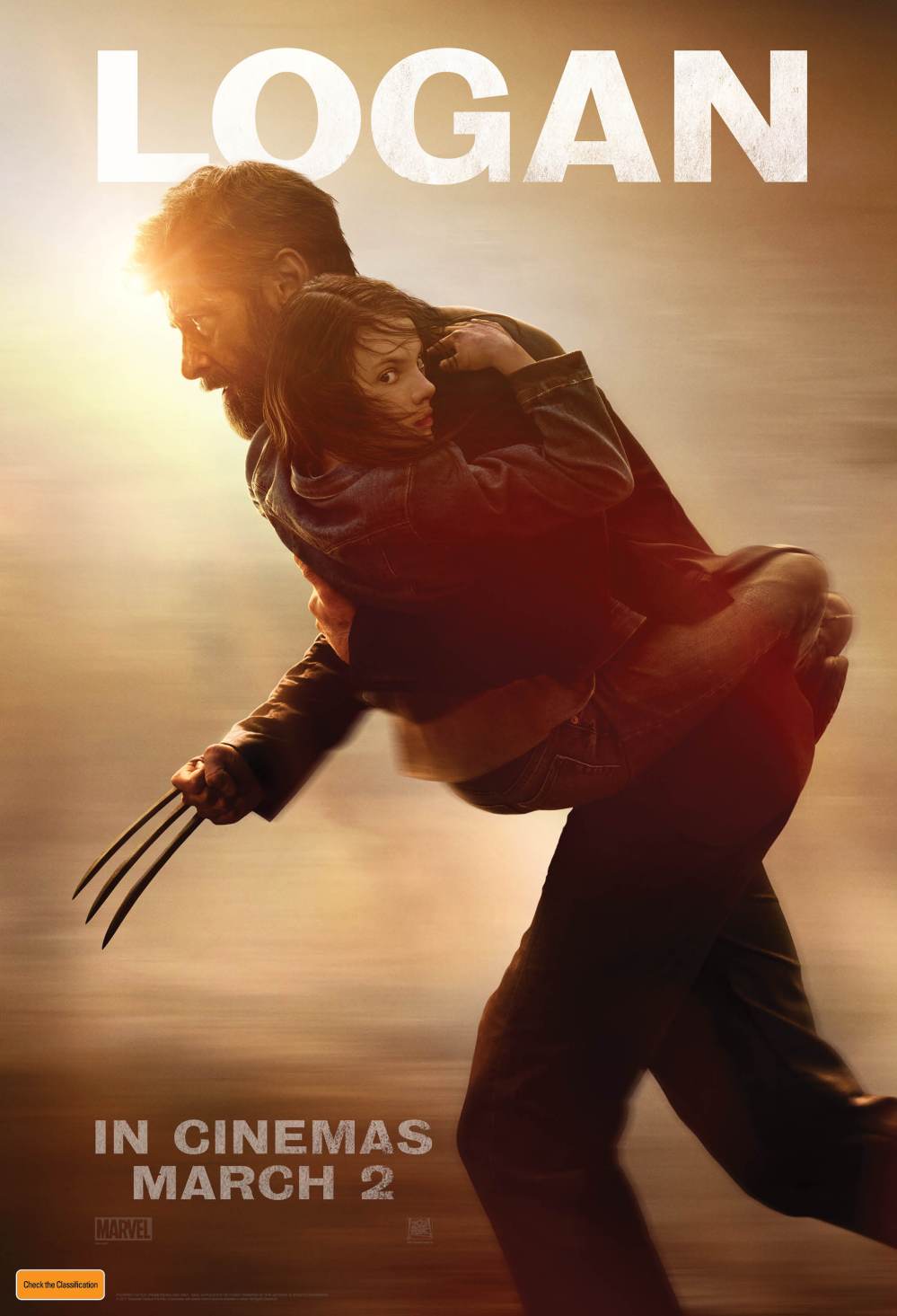 Directed by James Mangold (The Wolverine).

Logan is a film with lofty ambitions. And whether those aspirations are reached, exceeded or not quite realised depends on your level of slavish devotion to the mutant realm inhabited by the characters of the X-Men.

With director James Mangold (who steered Johnny Cash biopic Walk The Line to glory) injecting his own brand of gravitas, Logan wants desperately to be considered a peer to the Nolan Batman films.

Notching up a tenth mutant feature film and bidding a final farewell to the character in its third solo outing, Logan wants to send Wolverine into the sunset with as much reverie as possible. Challenging when the main players are decrepit versions of their former selves.

Using an 8 part graphic novel “Old Man Logan” as a foundation, the film seems to veer wildly from the narrative set out in that publication and the world Logan inhabits is noticeably absent of the star-studded superhero lineups we are accustomed to seeing in film.

In the near future, a weary Logan cares for an ailing Professor X in a hide-out on the Mexican border. But Logan’s attempts to hide from the world and his legacy are up-ended when a young mutant arrives, being pursued by dark forces.

That young mutant is Laura, and she has a connection to Logan that he refuses to acknowledge. Her nasty streak may have something to do with the success of an earlier Marvel character who wasn’t afraid to get his hands dirty.

This time last year, that cheeky mercenary was tearing up the box office on his way to Australian receipts tallied at over $40 Million AUD.

Deadpool blew the lid off our perception of what a relatively minor comic book character could achieve on the big screen, and 20th Century Fox scrambled to inject more R-Rated grit into future superhero projects.

Those gritty fingerprints are all over Logan, intended to be the tenth installment in the X-Men film series, as well as the third and final Wolverine solo film following X-Men Origins: Wolverine (2009) and The Wolverine (2013).

Hugh Jackman reportedly accepted a pay cut to ensure the film would be classified with an R rating, which generally delivers a lower box office result.

The two previous solo efforts served up very different results and it makes sense that Mangold and Scott Frank return to a universe they clearly understand.

The good news is that fans should be more than satisfied wth this ultra-violent send-off.

Unfortunately for me, after so many dubious entries in the X-Men series, I’ve lost track of, and stopped caring about, the happenings of the mutant world and found Logan to be a Wolverine film way past it’s prime.

Twelve years from now and Professor Charles Xavier, once a sprightly and powerful telepath, the founder and former leader of the X-Men is looking worse for wear as he languishes inside a gigantic barrel on a remote property somewhere near El Paso Texas.

James Howlett (aka Logan aka Wolverine aka Weapon X) is eking out a living as a limo driver as he saves his hard-earned cash with the dream of purchasing a boat. (This plot point referenced repeatedly never seems to be explained, one of many distracting loose threads.)

His car, a 2024 model, seems a pretty schmick machine and Logan puts his own adamantium reinforced body on the line when Mexican carjackers attempt to get between him and his beloved ride.

This opening and ultra-violent scene lets us know this iteration of Wolverine ain’t fucking around. NB – He also swears a lot. 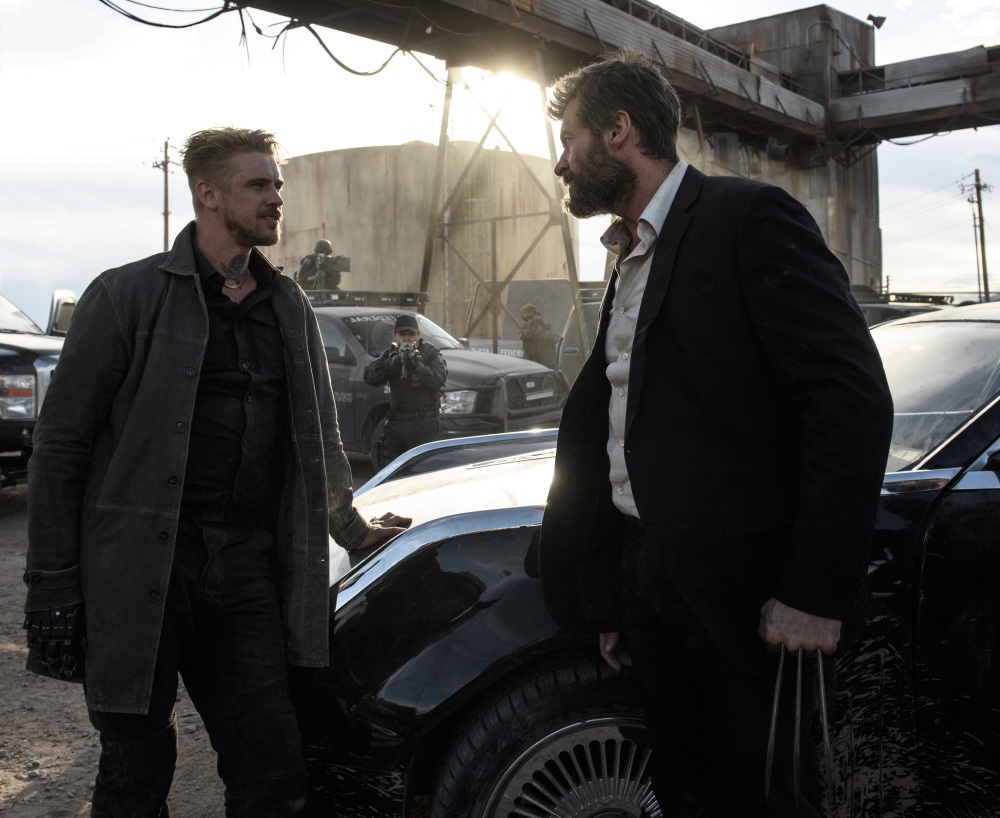 Leaving the gringos laying in the dust, Weapon X (Logan) returns to his compound, where Stephen Merchant as Caliban – A mutant capable of sensing and tracking other mutants – is caring for Professor X – rolling around his barrel in a wheelchair spouting lines from infomercials. Caliban has had a bad night and tells Logan he must give the Prof his meds before his unstable telepathic powers wreak more havoc.

Trouble comes calling in the form of Boyd Holbrook as Donald Pierce Transigen‘s relentless, calculating and intense head of security, and leader of the Reavers, and it would seem Pierce most definitely enjoyed watching Mad Max: Fury Road and now has his own version of Furiosa’s robotic arm. (Old Man Logan author Mark Millar admits he is a huge fan of Mad Max)

Holbrook delivers a tenacious performance as the relentless Pierce, as he searches for a young mutant (Dafne Keen playing Laura like Little Miss Sunshine with an ice addiction) who turns up unannounced in the boot of Logan’s luxurious bullet-proof limo.

I could tell as the film ground on in a grim and violent fashion that I was a stranger in this strange universe. However, as unfamiliar as certain aspects were, it felt like plot points could be spotted a mile off and nothing ever happened that was a surprise.

Touching on the nature of the potential perils of genetic modification and an appetite for mood altering substances, there are some themes in Logan that I would have liked to see explored more fully. Particularly as the film feels like it drags on forever as it lumbered past the 2 hour mark.

I also would have liked a better exploration of the year 2029. Setting the film in the future seemed to only be done to age the characters rather than explore what kind of world we may face 12 years down the track. Old Man Logan set the action FIFTY years in the future.

Mexicans jostling to enter the U.S. as Logan drives back and forth across the border is hardly an original idea.

I think given the boisterous nature of Deadpool and how wickedly funny that film was, this dour entry as we march slowly and painfully towards Logan’s grave delivered very few enjoyable moments.

Even when a second Weapon X makes an appearance and the two clawed combatants face off against each other, it was again a case of feeling like it’s all been done before.

I’ve seen multiple references to this film and The Dark Knight. Logan desperately wants to be taken as seriously as Christopher Nolan’s epic trilogy, but it lacks the cast, the story, the gadgets, the characters and the finesse that made them the best superhero films of all time (IMHO).

Fox would do well to remember one of the key reasons why Deadpool worked so well. It NEVER let you take it seriously and as a result delivered a hugely entertaining superhero blockbuster that had fans returning for multiple visits.

Once was more than enough for me and Logan.