Daniel Blake (59) has worked as a joiner most of his life in Newcastle. Now, for the first time ever, he needs help from the State. He crosses paths with a single mother Katie and her two young children, Daisy and Dylan. Katie’s only chance to escape a one-roomed homeless hostel in London has been to accept a flat in a city she doesn’t know, some 300 miles away. Daniel and Katie find themselves in no-man’s land, caught on the barbed wire of welfare bureaucracy. Directed by Ken Loach.

So reads the synopsis for this profoundly moving film.

The movie kicks off with audio of Daniel (Dave Johns) being interviewed at his local job seekers office over the opening credits. We cannot see him or the “healthcare professional” tasked with evaluating his eligibility for welfare payments due to his incapacity to work following a heart attack on a job site, but we can hear the questions being asked of him, and his increasingly exasperated answers.

The absurdity of the exercise becomes immediately apparent as he grasps that the questions being asked of him, which he has, by the way, already answered, are designed to circumvent the medical advice of his own doctor who has prohibited Daniel from working until he is in better health.

Daniel is a tough old bastard prepared to stick up for his rights. We know this because he is not shy about admonishing firstly his neighbour for leaving rubbish out the front of his council flat, and then a man letting his dog crap on the communal lawn of Daniel’s block of units.

So when he receives a notice that he has not been approved for welfare payments as he has been deemed fit for work by the “healthcare professional” from the start of the film, he marches on down to the job seekers office to rectify the situation.

It is here that he comes face to face with the stark indifference of the state, as he witnesses a young mum, Katie (Hayley Squires) and her young kids being turned away for arriving late to an appointment.

He takes the young family under his wing after he stands up for their rights and is also asked to leave the welfare office before they can get their cases resolved.

There are subtle visual references to the conflicting nature of his attempt to get what he deserves – some respect, some attention, some payment and some empathy.

As he walks about Newcastle he wanders past references to “love” and “heart” and it is clear that the reciprocal nature of his friendship with Katie and her kids provides immeasurable benefits to their wellbeing.

But as he is dragged into ongoing disputes with the system, his own mental and physical health suffers, and he and Katie both experience dramatic declines in their affairs.

Writing about this film brings back unshakable images from the screening, provoking tears to once again well up in my eyes at the injustice of a system designed not to show mercy and catch those vulnerable to exploitation, but rather to reduce them to a statistic that can improve a government’s chances of re-election by reducing the number of people the state is providing for. It is disgusting, and it is what people in developed countries face every day when they are attempting to survive in the face of economic hardship. 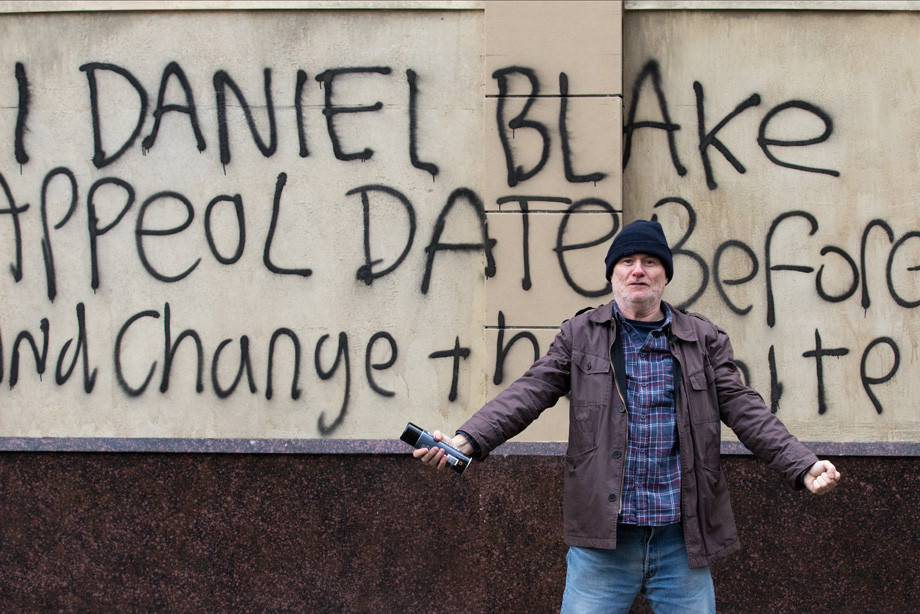 Finally Daniel can take the provocation no longer and he acts, drawing attention to his plight when he takes a can of spray paint to the walls of the jobseekers office in protest at his treatment.

This is one of the heaviest films of the year, and although it has so much heart and warmth and humanity in it, it will absolutely bring about a tidal wave of emotional responses from any cinema audience.

See this film and think about what kind of world we want to be part of, where we can easily turn a blind eye to the poor, the homeless, the sick and the disempowered, or make an effort, not matter how small, to ease the suffering of those in need.

Phew. Take a box of tissues and don’t make plans for immediately after this one. You will want to catch your breath.