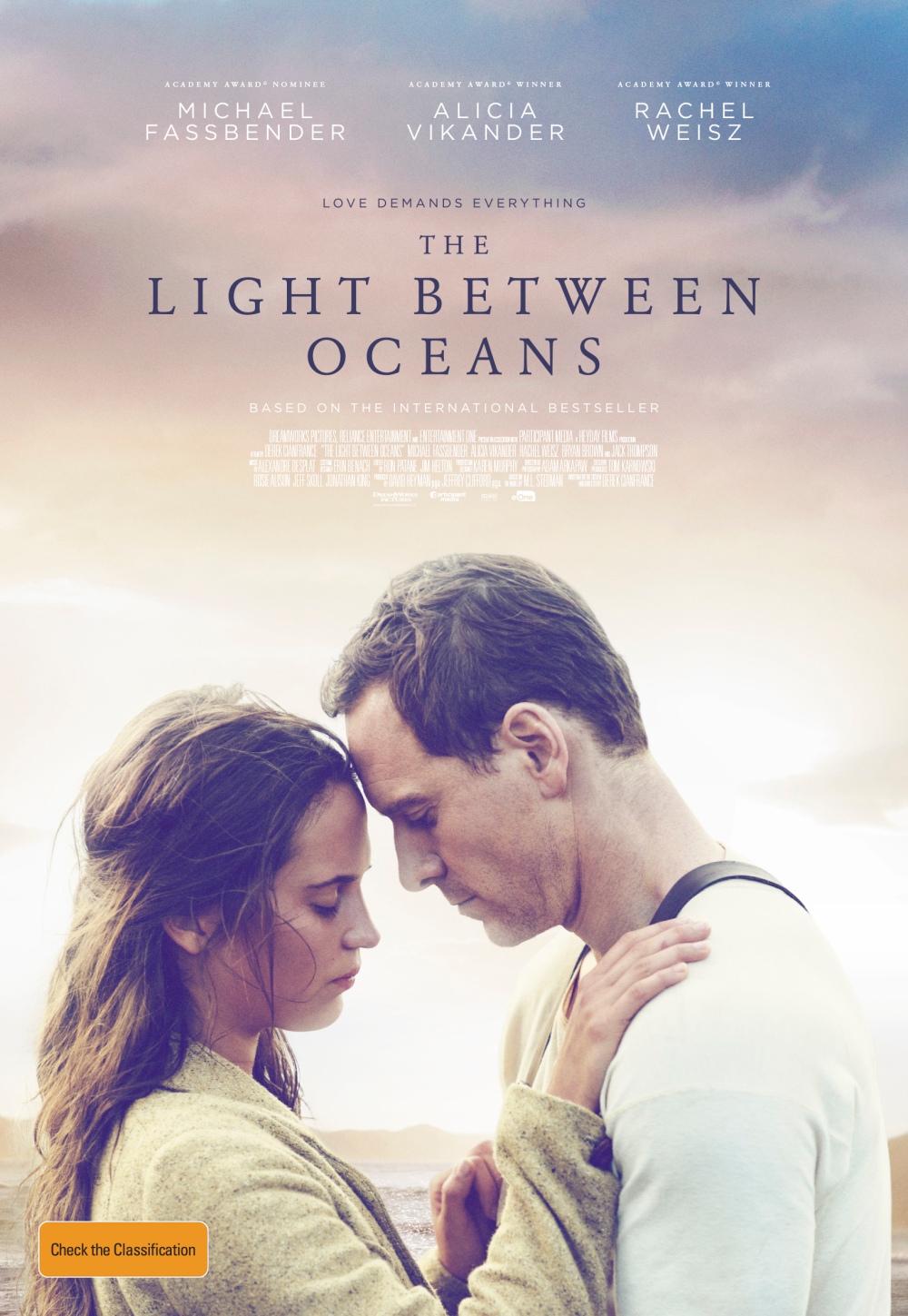 Written and directed by Derek Cianfrance from the novel by West Australian author M.L. Stedman starring Michael Fassbender & Alicia Vikander The Light Between Oceans washed ashore this week and I was reluctant to see it because, as romantic as I am, romantic dramas are not high on my to-see list.

With plans to catch two films back to back (The Accountant followed immediately after), I inadvertently found myself in a “Babes in Arms” session.

For those unfamiliar with this modern innovation/nightmare it is an opportunity for new parents who have difficulty getting out of the house to see a film, to do so and bring their infant along.

The lights remain on low at the rear of the cinema, the sound is slightly quieter and crying babies are de rigeur.

I was the only patron without a tot, however, as the central plot of the film revolves around a baby that washes ashore a remote island inhabited only by a lighthouse keeper (Fassbender) and his wife (Vikander), I figured any extra wailing would be well suited to the film’s soundtrack.

Following World War 1, soldier Tom Sherbourne (Fassbender) accepts a 6 month post on Janus Rock, a lighthouse off the coast of Western Australia. This initial posting is shown with remarkable succinctness as we see him operate the lighthouse and perform menial chores and maintenance, comfortable in the reclusive nature of his new existence, after what has presumably been a horrific few years in the trenches of the Western Front.

Sherbourne is called back to the town of Partageuse prematurely, where, over lunch of tea and sandwiches, he learns that the previous lighthouse keeper won’t be returning to the gig after all, as he went mad and threw himself off a cliff. Sherbourne is promptly offered a three year contract which he immediately accepts, and sets about rectifying the sole inhabitant statistic by having a picnic with the forthright local lass Isabel Graysmark (Vikander).

The pair embark on a brief courtship, naturally difficult due to the era and the fact that she is in town and he is on a small rock in the ocean, whereby their primary method of “courting” is to write letters to one another. They clearly have a flair for corresponding as it is not long before they marry and set about starting a family on their “island paradise”.

Once together at the lighthouse, their honeymoon period looks like a lovely time and place to be alive. I could watch Fassbender and Vikander in just about anything, so watching them play smitten young Australians of 100 years ago, knowing full well they were in a real relationship at the time of filming is quite romantic.

New Zealand and Tasmania double for Western Australia, and the coast around Janus Island, although inhospitable to ships, is simply breathtaking.

The happy couple make for joyous newlyweds, but trouble is brewing on the horizon.

When Isabel loses her first child to an sudden miscarriage, the couple cope with the tragedy as best they can in their isolated location. Following a second miscarriage, a dinghy washes ashore with a dead adult male and a live baby girl onboard.

Tom, with his military background, is adamant that the couple report this unexpected development to the relevant authorities, but Isabel believes it is their destiny to keep the infant and convinces Tom to carry on as if it were their child that they were expecting.

Against his better judgement, Tom buries the body of the man and they raise Lucy as their own daughter.

The family carry on as normal a life as you’d expect possible under the circumstances, and Cianfrance does a superb job of portraying domestic harmony with an undercurrent of foreboding, as Tom struggles to accept the choice he has made and Isabel remains seemingly untroubled by the situation.

Attending a service for Lucy’s christening, Tom wanders through the church cemetery and spots something that causes him to become further perturbed by his course of action and he feels compelled to write to the family of the row boat’s occupants.

This tension builds and I found myself glued to the screen as they make a fateful trip back to town once more shortly afterwards for a public commemoration of the lighthouse where they come face to face with the mother of the shipwrecked child, local widow Hannah Roennfeldt (Rachel Weisz).

With the cat just about out of the bag, Tom must wrestle with his conscience as he is torn between the right outcome for his wife, his daughter and her real family.

When the local constabulary become involved in the case, the tension increases, and the film builds to a dramatic conclusion.

I loved the casting, not just of the leads, but seeing Garry McDonald, Jack Thompson and Bryan Brown together in one film added to the authenticity of creating an olden days Australia.

The cinematography from Adam Arkapaw is up there with his best work from True Detective and Animal Kingdom.

The art direction is wonderful, creating an absolutely genuine Australian environment indoors and out, and I was grateful to have a jumper as I could literally feel the biting cold of the chilly ocean winds.

If there is a criticism, unfortunately it is a substantial one for me, and it is in the rapid conclusion of the film’s main plot point – what should happen to little Lucy, and the subsequent coda that takes place many years down the track.

After steering us so deftly through crashing waves of emotional turmoil, I felt the director wrapped things up too neatly, too quickly.

While many of us may wish for a happy ending to our films, this one left me feeling like I had missed a pivotal scene.

For what it is worth, Cianfrance says that despite some differences in opinion, upon seeing the film, the novel’s author “said she spent the whole day weeping because she felt that she had been understood”.

Maybe I should have taken a baby along.