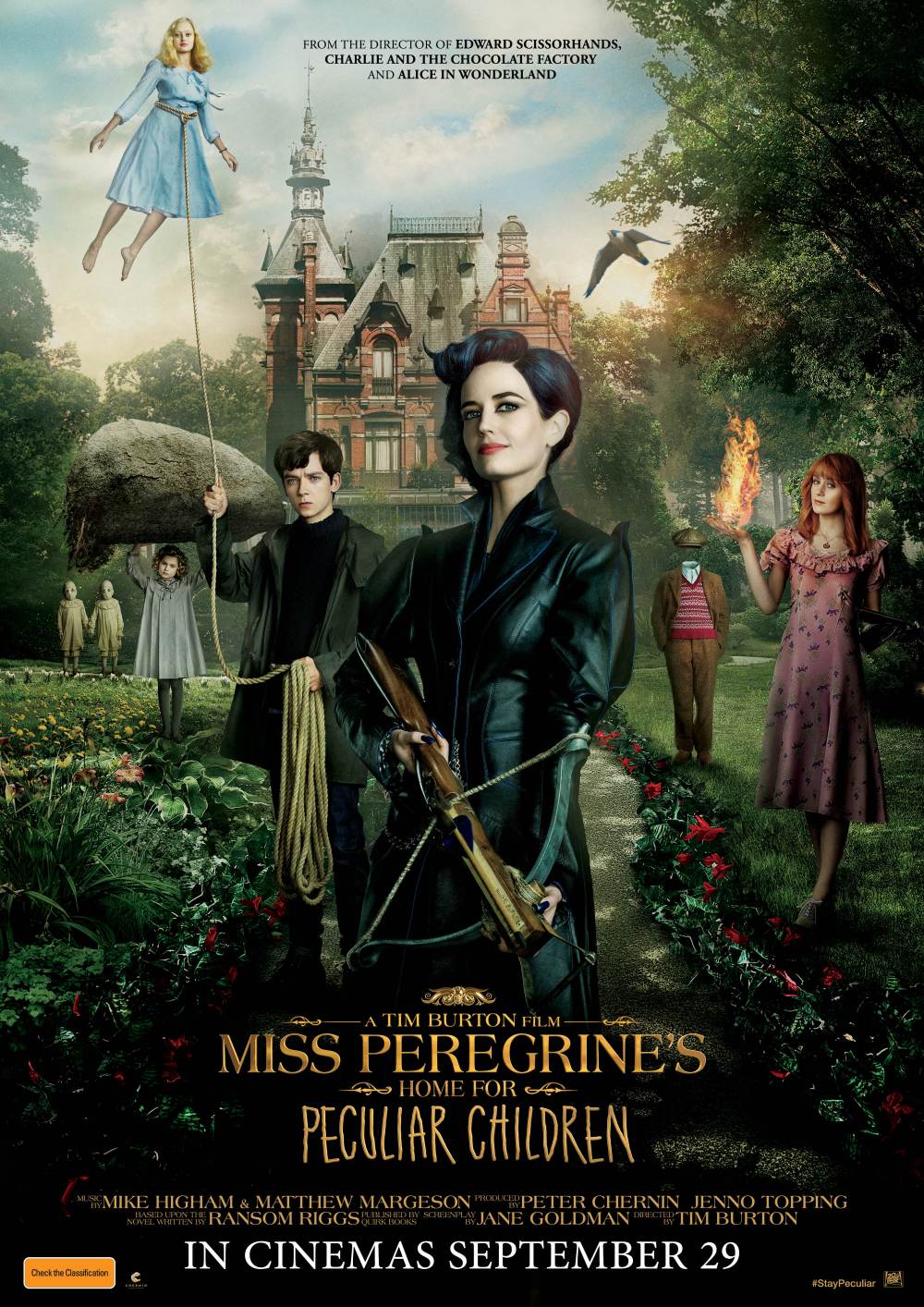 Similar to Hogwarts School of Witchcraft and Wizardry found in the Harry Potter Universe, or X-Men’s Xavier’s School for Gifted Youngsters, Miss Peregrine (Eva Green) is running a sanctuary for unusual tykes.

In this case a bunch of kids whose talents range from pyro kinesis and invisibility to a boy who can bring inanimate objects to life with the addition of hearts and brains, a boy who breathes bees, a floating girl who can control air, a pair of twins with stonemason skills and a young lass with a gigantic set of teeth on the back of her head.

These youngsters and their guardian are stuck in a time loop on a small Island off the Welsh coast in the middle of World War 2. Every day Miss Peregrine resets her fob watch to avoid them all being obliterated by a Nazi bomb and they relive the previous 24 hours. It’s a neat observation about the passage of time for children where days can seem like an eternity.

Enter into this strange world Jake (Asa Butterfield), grandson of Abe (Terence Stamp), a previous island inhabitant who left for unknown reasons on the day of the bombing.

Jake is a restless teenager in current day Florida, besotted with his Grandpa who told him tales of the island and it’s remarkable inhabitants.

When Grandpa meets a mysterious end, Jake can’t shake the feeling that he is somehow a part of the puzzle himself.

Naturally Jake’s parents find his obsession with his Grandpa’s past a little disconcerting and send him off to see a shrink – Dr Golan (Allison Janney).

The therapist recommends a trip to the island might be a good way to bring closure to Jake’s feelings for his grandfather and so Jake and his Dad (Chris O’Dowd) travel to the island of Cairnholm and inevitably Jake meets the motley crew of misfits.

Frightful creatures known as “hollowgasts” hunt the “peculiars” under the instruction of “wights”, highly evolved hollowgasts, led by Mr. Barron (Samuel L. Jackson) who feed off the eyeballs of the children and need Ymbrynes (a particular kind of peculiar that can change into one kind of bird and can create and maintain a time loop) to help retain some form of humanity to blend into their environments.

Naturally the island dwellers are under threat from these creatures and the children must make a plan to save the day.

It sounds more complicated than it is yet Tim Burton masterfully creates a believable world that allows the bestselling book to shine on the big screen.

It is a must see in 3D and a worthy bedfellow of family classics like Harry Potter, Labyrinth, Hugo, Jumanji and The Goonies.

Burton crafts spectacular visuals that draw you into this gripping and quirky tale of adolescent coming of age. Having just watched Edward Scissorhands the day before with my 8 & ½ year old daughter Ruby, she was spellbound by Miss Peregrine’s Home for Peculiar Children. I was too.

It may be a fraction long and a fraction frightening for under tens, but it delivers a ripping yarn, brilliant effects, top shelf cast and crew, and I for one can’t wait for a follow up installment.