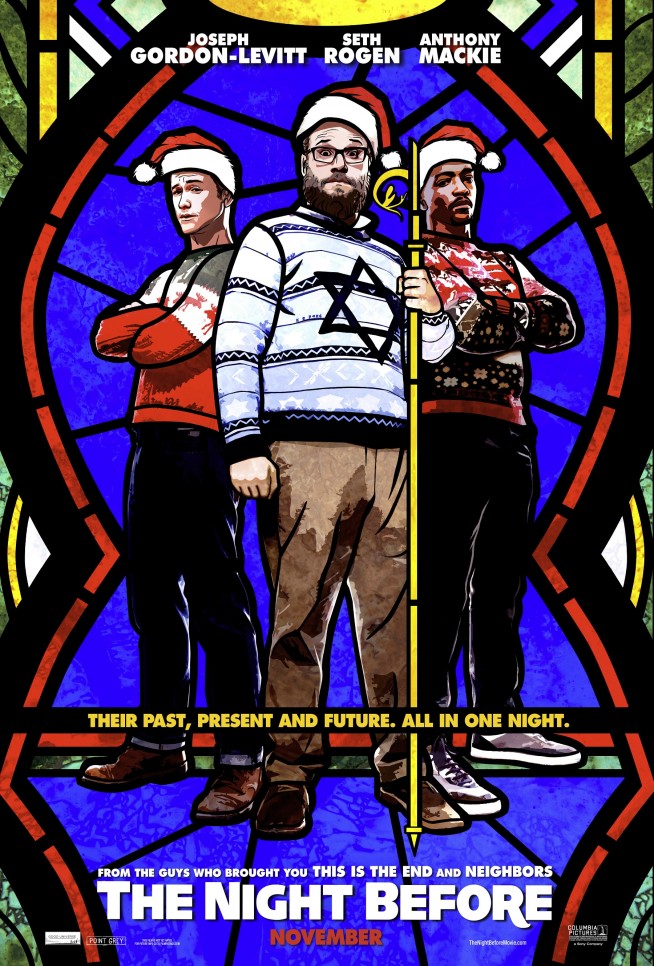 Sony’s positioning for this film is “Don’t Miss The Funniest Christmas Ever”.

That’s some huge fucking balls right there because last time I checked there were at least a dozen Christmas Comedy Classics that literally shit on this film.

If you’ll pardon my French. And if you can’t handle my language, then this film is definitely NOT for you.

Seth Rogen barely holds the film together as Isaac, who, together with lifelong mates Chris (Anthony Mackie) and Ethan (Joseph Gordon-Levitt), bond every Christmas Eve by indulging in all manner of festivities including getting high, singing karaoke and running amok.

This year may well be there last get-together, with Isaac about to become a father, and Chris enjoying life as a celebrity, they get set to go out with a bang.

This is as patchy as a bikie’s leather jacket, with the many hearty laughs offset by awkward sentimental sequences as each character explores their own story arc involving women, lost family members and pending responsibilities.

It is nowhere near as outrageously funny as either This Is The End or Bad Neighbours (both films referenced on the poster) but contains sufficient genuinely laugh out loud moments to warrant a date or mate night at the flicks.

Rogen as the Jewish guy at Midnight Mass on Mushrooms IS an all time funny scene. Similarly there are riotous drug related highlights sprinkled through the film, but with four screenwriters throwing up ideas, the story gets bogged down with unnecessary baggage that hurt the laughs by taking up time and space with gear that is neither funny nor meaningful.

OK, so in The Walk, it’s an old 70’s TV in a secondhand store and it’s kind of cute. In Spectre it’s expected as Bond has never been shy about flashing his branded gadgets about the place from watches to cars to booze.

But seriously, in an animated film for kids, does a vampire really need to video chat on a Sony labelled mobile phone with the werewolf kids watching a Sony TV?

And, in this one, there is an attempt to make the product placement an opportunity for comedy, with Mackie filming social media posts loudly and obviously on his Sony phone, but the gag falls woefully short of its mark. A mix-up with two iPhones is a key plot point so clearly some executive was unable to resist insisting on shoehorning Sony products in there. Trust me mate, it is not enhancing for the film, the product or the overall brand. It just comes off as cheap and desperate.

The fellas make a few references to playing a Nintendo 64 (Goldeneye of course), and I don’t think it would have been out of place to have used Playstation instead. They did talk about it as an item from their youth, but seeing as how the PS1 was first released in 1994, and Goldeneye in 1997 exclusively on N64, that may have been a less obvious opportunity for a revered Sony product. As far as I know your phones just aren’t that great.

We get it. You make pictures. AND you make devices to watch them on. Good for you. Maybe you don’t need to remind us constantly and pull us out of the imaginary world we are trying to lose ourselves in with our hard eraned cash for a few hours, coz guess what? Your devices are also really handy for bootlegging the finished products too.