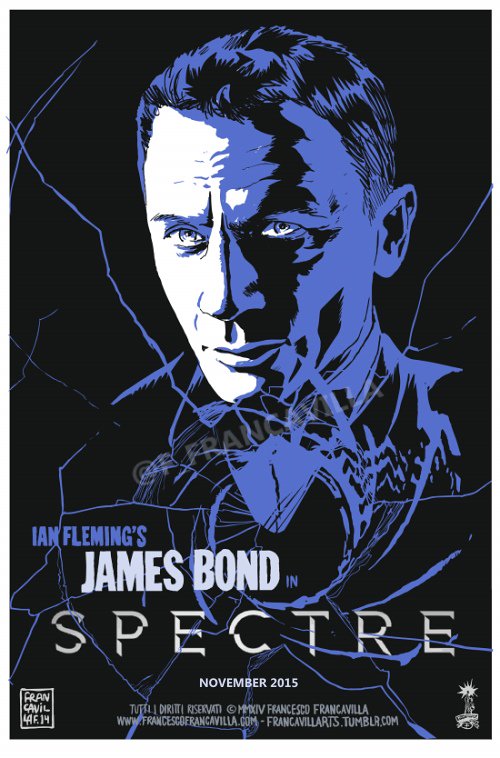 The 24th Bond film charges out of the gates and really doesn’t stop thrashing about until the end credits roll.

007 is on a mission after the turmoil unleashed in Skyfall, and we find him in Mexico City in a spectacular sequence incorporating a Día de Muertos festival, reminiscent of similarly chaotic crowded street parade scenes in both Thunderball and Live and Let Die.

It’s no coincidence as this latest installment Spectre seeks to join the dots not just back through the “Daniel Craig Collection” plots, but all the way back to the first appearance of the dreaded organization in Thunderball.

It makes sense to pay homage to these earlier films, partly for the fans, but particularly in a commercial sense as Thunderball was the highest grossing Bond film until Skyfall (adjusted for inflation)

Spectre is a huge undertaking. At over 2 & ½ hours long, it crams action into every available piece of screen with the grand opening where Bond charms a woman, not into bed, to onto a rooftop to pursue his quarry.

It’s not long before he’s in a helicopter for one of the most blistering stunt sequences I’ve seen.

The high-energy hijinks continue across continents and at one point or another Bond pilots light planes, expensive cars, speedboats and some kind of parachuting jetpack.

At every possible opportunity Daniel Craig fights with Dave Bautista (a slightly more subtle version of Dwayne ‘The Rock” Johnson) including on a train in the desert, through a forest and a snow covered mountain.

The story on the whole is some kind of elaborate McGuffin that sees Bond on the hunt for the mysterious Pale King, trying to get to the bottom of just who was responsible for the death of M in Skyfall, and Dame Judi Dench is notably absent from this film, having been part of the Bond family since 1995’s Goldeneye. There’s also the ubiquitous surveillance state storyline that seems de rigueur in almost every genre nowadays. No offence James, but I think we’ve all heard of Skynet… (And Big Brother long before that.)

Spectre is Spectacular. It’s also like a greatest hits album, or a Mad Magazine “Best of” Issue.

There’s everything you want and more, but despite the incredible effort gone into a production of this scale, it didn’t feel like I learned anything new about his character or his motivations beyond seeking revenge for M’s death.

Perhaps that’s because the film is a tip of the hat to every Bond film that has come before it. And it wouldn’t be a Bond film without a bad guy pulling strings from some exotic location.

It’s about 2/3 into Spectre we meet this film’s chief bad guy. You’ve probably worked out who that is by now if you’ve been paying attention. It’s a name associated with giving Bond grief for the last five decades. As Christoph Waltz says – “I’m the author of all your pain”.

See Spectre for the thrilling stunts, the wry humour, the ripping pace, the modern women, and the overall blockbuster-iness of it all on the big screen.

Sit back, let it wash over you and enjoy the ride. Then go back and find a new appreciation in the whole Bond back catalogue.

I for one just bought Casino Royale on Blu-ray to re-watch with fresh eyes. The Daniel Craig one. Because that’s all that matters now – to debate if it’s he or Sean Connery who can claim the title of the Best Bond. Yet.