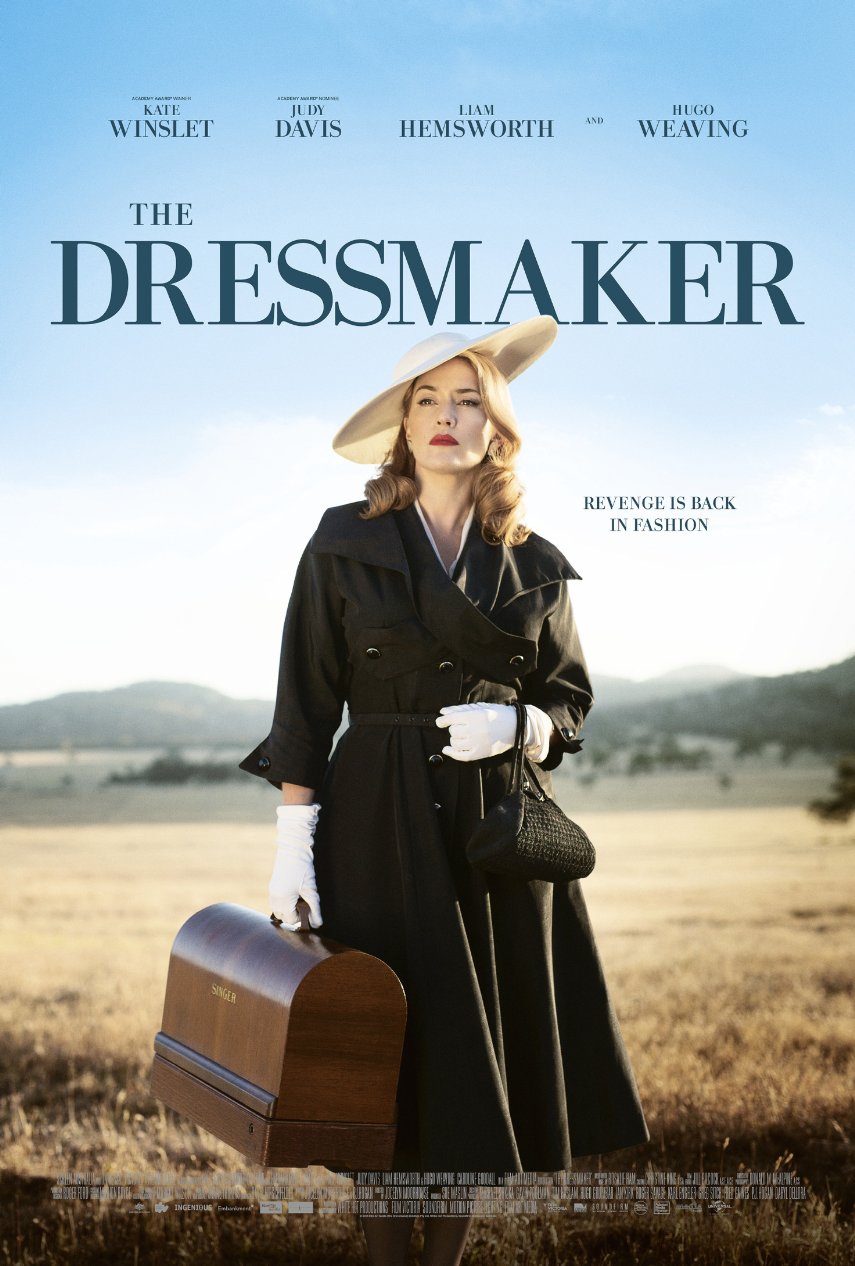 Here’s a film that in it’s poster seems to be a straightforward tale of a glamorous woman arriving in a country town with a handbag over one arm, with the other toting a sewing machine.

It’s an image that had me reluctant to watch the film, and does not do the contents of this film justice.

And justice is what The Dressmaker is all about.

Based on the novel by Rosalie Ham and directed by Jocelyn Moorhouse, the film stars Kate Winslet as Myrtle “Tilly” Dunnage, the story’s protagonist, returning to her home town of Dungatar from Paris, many years after she was cast out by the townspeople who held her responsible for a young boy’s death.

Myrtle has no recollection of exactly what transpired during the fateful event, and she has returned home to get the answers that have eluded her since childhood.

Her mother Molly (in a knockout performance from Judy Davis) lives in squalor on top of a hill overlooking the town, and Tilly’s first task is to settle in with her Mum, clean up the place and reacquaint herself with the locals.

From there she wreaks havoc in every imaginable way.

Given the conservative and claustrophobic nature of rural Australia in the 50’s, when the film is set, the cast of characters that inhabit Dungatar are both astonishing, yet completely familiar to a contemporary audience.

There’s the family who own the local store – The Pratts (Shane Jacobson – Alvin, Rebecca Gibney – Muriel, and Sarah Snook as Gertrude “Trudy” Pratt) who are desperate for their spinster daughter to marry into a good family.

An eccentric old pharmacist Percival Almanac (Barry Otto) crippled with scoliosis, who knows everybody’s business through developing their photos, is the bigot that you’re itching to see get what’s coming to him.

Councillor Pettyman (Shane Bourne) plays a central role when his loathing of The Dunnages motivates him to seek out a new seamstress once Tilly and her sewing machine turn the town on it’s head introducing fabulously fashionable garments to the otherwise drab streets.

There is so much going on in this film, a mystery that unfolds revealing the truth about Tilly’s childhood, a mother and daughter reconnecting after years apart, numerous love stories for various characters, secrets, lies and plenty of laughs.

This is a perfect date night film, because in spite of a poster that would send most blokes running at the sight of it, it is also a spaghetti western with Tarantino fingerprints all the way through it.

“An Unexpectedly Glorious (and Barmy) Delight. I couldn’t help but love it”.