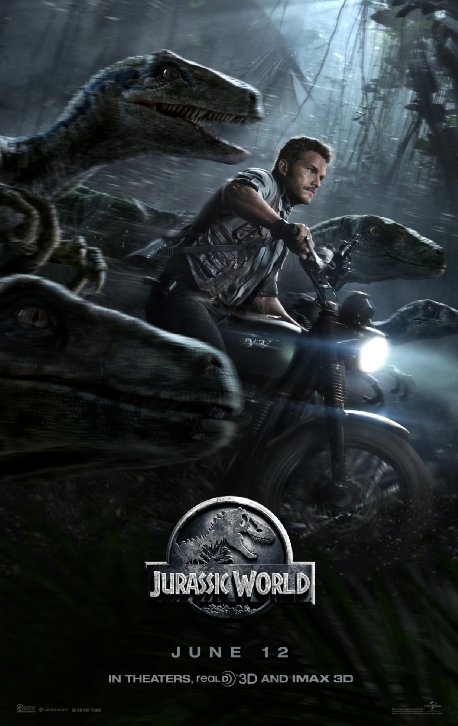 I became a fan of Chris Pratt not through his work on Parks & Recreation, but as the voice of Emmet in the Lego Movie, and of course as brash space adventurer Peter Quill in the surprise hit Guardians of the Galaxy.

His onscreen presence is almost enough to keep me interested in what is essentially a more expensive, but less entertaining remake of the 1993 Michael Crichton penned dinosaur blockbuster Jurassic Park – this time under the name Jurassic World.

Two brothers, Zach & Gray, visit their Aunt at her place of work – Cool, a dinosaur Theme park on an exotic island – along with 20,000 odd other tourists. Turns out Aunty Claire (Bryce Dallas Howard from Terminator Salvation, The Help and Twilight) has her hands full monitoring the park’s profitability and has to delegate the babysitting to her PA. “Don’t worry” she tells the two boys anxious Mom on a phone call, “She’s British, they’re great with kids”.

Inevitably the boys get lost and the big creatures get loose leaving Uptight Claire to try to keep the park safe, while also ensuring its long term desirability as a non-lethal destination for future guests, by restricting access to the dangerous zones of the island where the monsters are now roaming free, rather than initiating an emergency evac of the island’s “live count” of 20K folk.

For my money this is a kids movie for boys ten and up, and a suitable film for all high school teenagers and beyond.

There’s some blood, but for my tastes not nearly enough.

Along with the classic movie monsters like Dracula and King Kong, Universal have mutant hybrid dinosaurs in their character line-up, come on guys use them to their full human crushing capabilities.

Some good bits, mainly in the last half hour, but not nearly enough for a two hour film.

Unlike San Andreas which is about an earth-shattering disaster, jam-packed with non-stop thrills, Jurassic World doesn’t make enough with it’s own catastrophic premise of huge prehistoric beasts on a  bloodthirsty rampage amongst thousands of innocent holidaymakers… It’s not a massive disaster, just a tad dull.