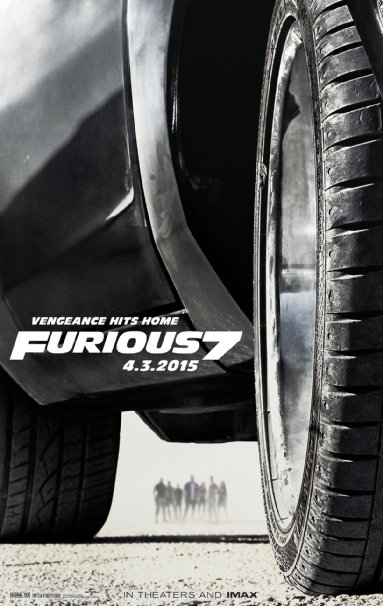 A Truckload of Testosterone-Fuelled Fun. 3 Stars.

I made a point a few weeks back in regards to Universal Pictures lacking a Superhero Film Franchise. Turns out I was wrong. If you can call the stars of Fast & The Furious Superheroes, then F & F is the biggest ongoing real-world/non-fantasy action franchise going, at least according to one of my favourite Box Office pundits at Forbes Magazine, Scott Mendelson.

In researching the Furious back catalogue I came across an interesting suggestion from a writer at The Guardian – that nobody looks forward to the 7th film in a franchise. That notion certainly makes the involvement of one of the masterminds behind Saw, James Wan, to come aboard as director all the more intriguing.

Stepping down from the director’s chair after his 3rd Saw film, he kept his hand in the Saw franchise as an Executive Producer.

What he brings to this 7th outing of the muscle-bound, muscle-car enthusiasts behind the wheel of super-charged machines, lead by Vin Diesel and Paul Walker (R.I.P.), is an eye for original flourishes within the action genre that ensure there’s no end of astonishing, and downright entertaining sequences throughout this almost 2 & 1/2 hour film.

He’s clearly a fan of The Raid films, and the many martial arts scenes bristle with energy. One stunt that involved a pair of adversaries fighting while sliding down an extended staircase on a door is just one of the dozens of new takes on ideas that have been endlessly repeated over the decades.

I’m not a particularly blokey bloke, so all the muscles, cars, and chicks in G-Strings don’t really get me going. I also love a story. Even convoluted outings like Jupiter Ascending will hold my attention better than the plot points in Furious 7. Essentially it’s a revenge story dovetailed into the 6th film.

What did catch my eye is the performance from Michelle Rodriguez. There’s something so lithe and real about her presence that makes her stand head and shoulders over the muscle bound action men.

This flick is for fans of matchbox cars and action man toys.

To Wan’s credit, (after a bit of a dull start) he ramps up the pace and keeps it going until there’s not a drop left in the tank. For everything we’ve seen before in the greatest action films of all time like Die Hard, Speed etc, there are flashes of genuine originality in a film that raises the bar for both the action genre, and movie cliches.

The end note, a fitting tribute to Paul walker will leave the most hardened blokes watery-eyed.

Personally I’m more excited about the vehicular violence and mayhem that’s round the corner in Mad Max: Fury Road.