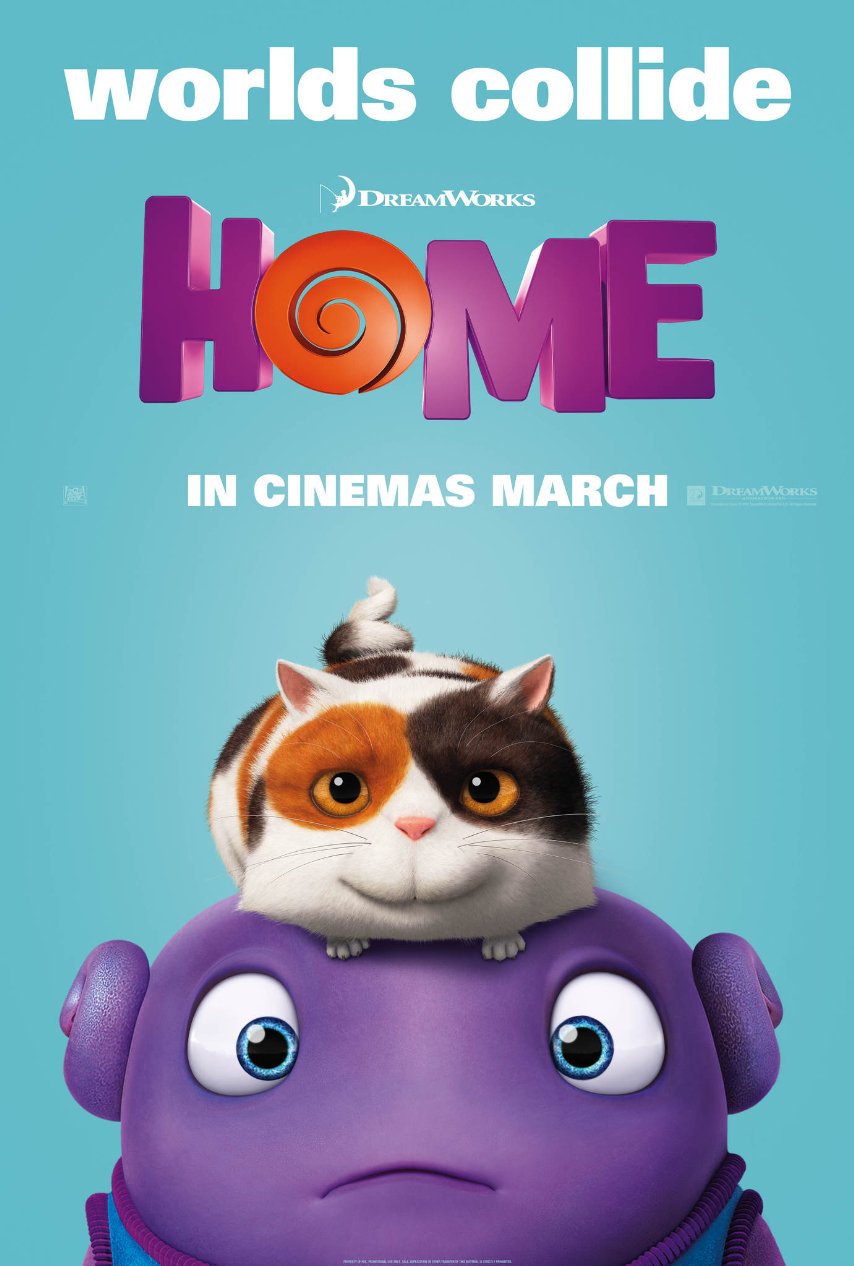 From Tim Johnston the director of Over The Hedge and Antz comes the tale of an alien race known as The Boov, who are fleeing the terrifying Gorg, and find themselves relocating on Planet Earth. Based on Adam Rex‘s 2007 children’s book The True Meaning of Smekday and starring Rihanna, Jim Parsons, Jennifer Lopez, and Steve Martin, Home is an entertaining enough addition to Dreamworks Animations library of hits – (Shrek, Kung Fu Panda) and misses (Shark Tale, Bee Movie) fitting somewhere in the middle.

The lead Boov is a little fellow named “Oh” (as in “Oh No not you again”), who is not really welcomed by the rest of the Boov population as he’s different to the norm. In “Oh” so many ways. He inadvertently sends a housewarming party invite, complete with explicit details on how to find his new “Home” to the entire galaxy, including the dreaded Gorg, rendering him even more of an outcast, in fact a fugitive. He teams up with Tip, the only human not relocated to a giant refugee camp in Australia, for reasons that are revealed in the film, and they embark on a quest to recall his email invite and reunite Tip with her mother.

Taking along my 7 year old girl as a date, (who had been quoting the trailer for weeks – a good indication of the likelihood of success for this title,) and she was captivated by the film’s many charms.

With school holidays upon us shortly, Home is a pleasant enough diversion for an an hour or two.

From the Cloudy With a Chance of Meatballs school of quirky animated pics, its aimed at 3-12 year olds, but suitable for the whole family.

It’s messages of tolerance, understanding, acceptance and the importance of family underpin the gags and excitement.

The first 2/3 of the film are played for laughs, and just as it threatens to become a little dull, the action ramps up right until the end.

If your kids dig the Minions from Despicable Me (set to star in their own film in June, or the The Squeeze Toy Aliens, also known as Little Green Men from the Toy Story films) then they should appreciate the odd little characters that are the Boov.