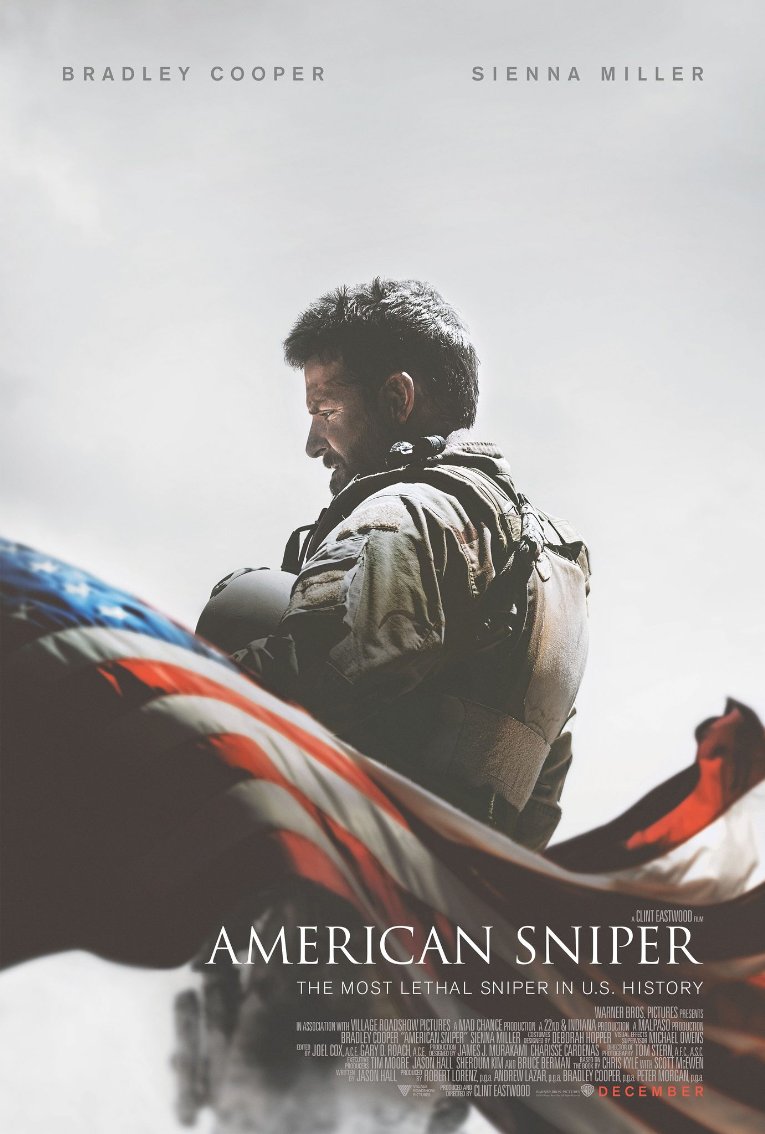 “The thing that haunts me are all the guys that I couldn’t save”.

Bradley Cooper stars as Navy SEAL Chris Kyle, whose four tours of duty in Iraq saw him earn the title of the deadliest sniper in U.S. History. When he tries to settle back down into his family life he struggles under the debilitating grip of PTSD brought on the by the horrors he witnessed in combat.

Veteran Director Clint Eastwood knows his way around a war film or two. As far back as 1982 with the Soviet era Firefox, to the 1986 flag waver Heartbreak Ridge and on to his twin masterpieces Flags of our Fathers and Letters from Iwo Jima, Eastwood is very clear about the message he wants to send to his audience.

In my mind Eastwood’s films focus on a handful of nostalgic notions, some of which are from a bygone era and some are still very much alive.

Firstly, his patriotic fervour is something I admire. Is there anything wrong with National Pride and wanting your home country to be the best that it can be? To me he doesn’t love everything about the good ol’ USA, rather he prefers to acknowledge what the country once stood for and what it is capable of. Freedom, justice, equality, opportunity and free speech.

In American Sniper he takes the memoirs of a soldier celebrated in the field for saving the lives of US soldiers in Iraq, and makes a film that covers this action while also delving into a deeply troubled mindset off the battlefield as Kyle fails to adjust to the civilian life that awaits him back home.

Bradley Cooper is deserving of his Academy Award nomination for his portrayal of Kyle as a conflicted man, desperate to save everyone he can. At several points he’s asked “You got some kind of saviour complex?” and it’s a question that Eastwood seems to be asking of his nation too.

Operating on many levels, as an anti-war film while also paying tribute to the US military, Eastwood has delivered a work that is profoundly thought-provoking, and plays to both extremes of the political divide.

Aside from the obvious issue of the WMD fiasco, American Sniper raises the question of what place a foreign nation may have in coming to the rescue of a people torn apart by conflict.

Iraq has been bathed in blood long before it first appeared on a map and the “Allies” are the latest in a long line of invaders staking out their claim to the resource rich patch of land.

For my money it’s what Eastwood deliberately leaves out of this film that makes it so intriguing, and still has me pondering the futility and inevitability of war several weeks after watching the film.

Just as Cooper has been recognised for his acting prowess in this effort, Sienna Miller too must receive praise for her tragic portrayal of Kyle’s loving wife Tara as she watches this tower of a man crumble slowly before her eyes.

There’s a long list of “Anti” War films, and American Sniper joins recent titles such as Fury and The Water Diviner that depict the havoc that a battlefield can wreak on a man’s humanity.

Chalk up another Military Masterpiece to Mr Eastwood.