I have a confession to make. I’ve played the drums for 25 years. So straight out of the gate, this film about a promising young drummer who enrolls at a cutthroat music conservatory where his dreams of greatness are mentored by an instructor who will stop at nothing to realise a student’s potential, had me at Hello.

Miles Teller as Andrew, the young drummer in question is guaranteed a nomination for best actor at the Academy Awards. So too his punishing mentor J.K. Simmons is likely to earn a nod for Best Supporting Actor for his portrayal of Fletcher, Andrew’s band teacher.

Fletcher is like a psychotic Charles Xavier from X-Men, and Andrew like Wolverine – with drumsticks instead of claws.

The psychological torture inflicted on Andrew by Fletcher is so dark and so intense that I had to burst out laughing at much of their interactions, just so I wouldn’t suffocate with the heaviness of it.

Fletcher believes that greatness comes through adversity, and he wants to be responsible for the next Charlie “Bird” Parker.

Andrew is a sponge who abandons his new girlfriend in the embryonic stages of their relationship so he can pursue his dream of not just “being great – but being ONE of the greats”.

Whiplash is Whip Smart with not a single bum note.

The climactic finale is unlike anything I’ve ever seen and I gave the film my own personal standing ovation as it ended.

Whiplash isn’t just great – It IS one of the greats. See it now. 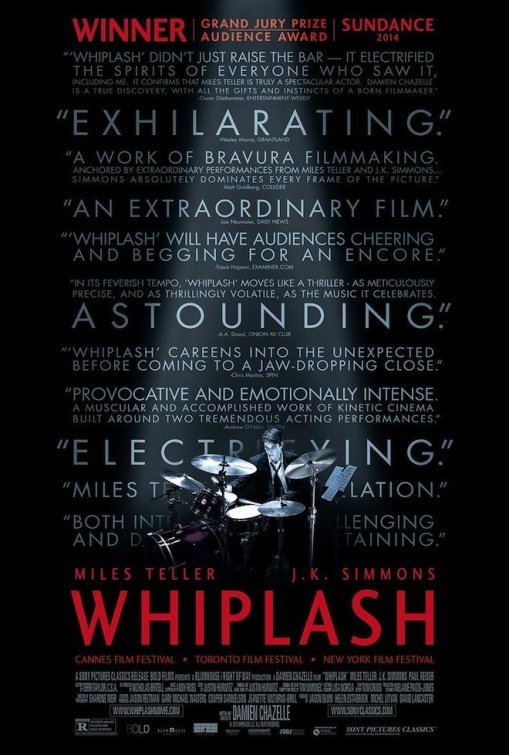