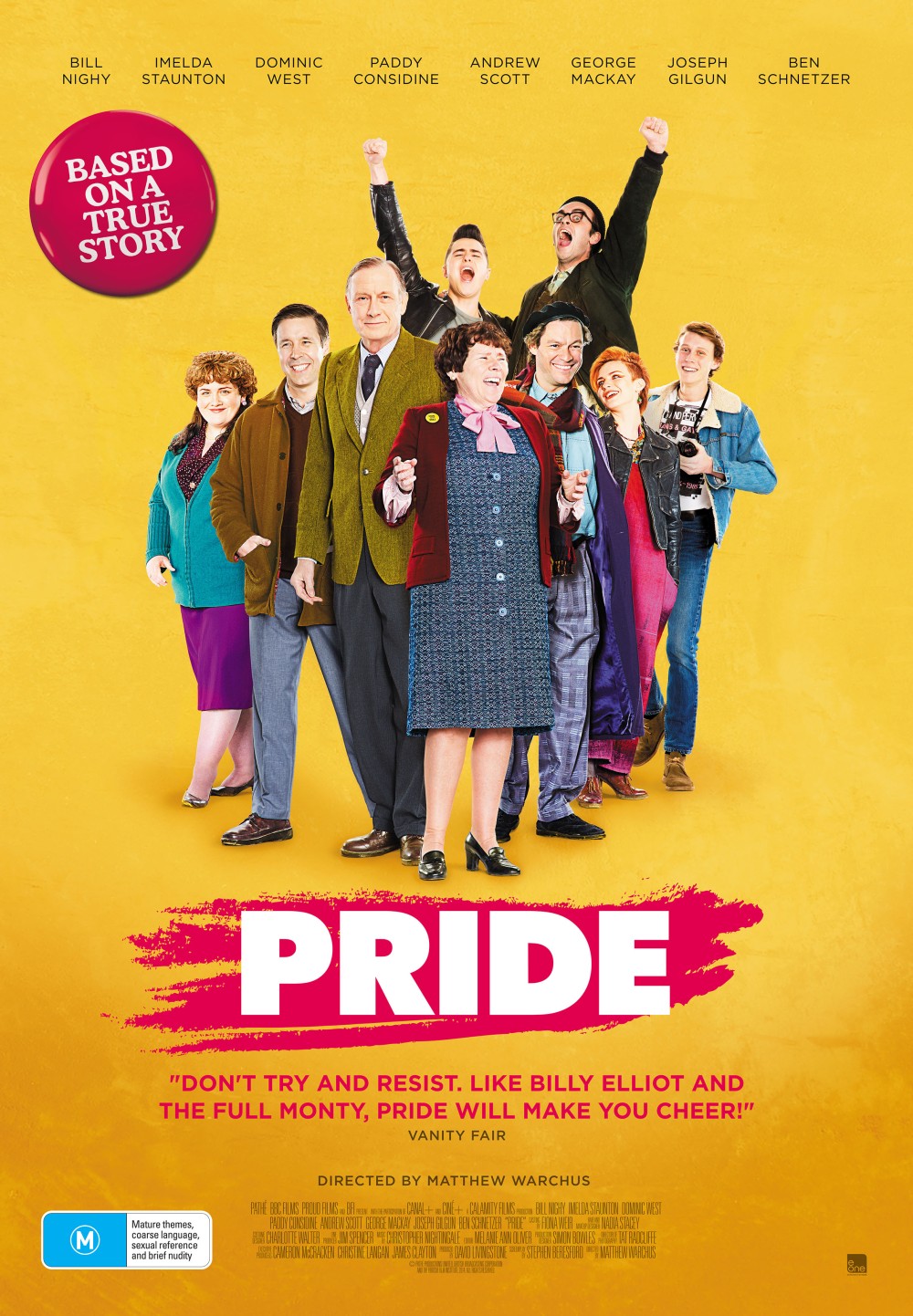 I’m extremely blessed to have been given the opportunity to review films and get paid for it. I adore my big screen fare, as well as art-house indie offerings. The mainstream stuff can get a little tiresome when you’re there every week as I am. For every bloodthirsty blockbuster that kills off the brain cells and beefs up the box office, there comes along a little gem. A film that might not set the world alight, but for those who get to see it and appreciate what it’s offering, our lives are enriched by the experience.

Pride is one of those films. A film that I would not dream of watching were it not for my role reviewing movies here online, and onscreen.

The premise is not ordinarily something I’d seek out – U.K. gay activists work to help miners during their lengthy strike of the National Union of Mineworkers in the summer of 1984.

But I do love a true story and this is one of the more uplifting tales about the human condition and our struggle to fight for the right to survive.

Ben Schnetzer from The Book Thief plays Mark –  a leading figure in the formation of the Lesbian & Gay Movement to support the striking Miners – LGSM.

Mark sees that the miners are being oppressed and bullied by Thatcher’s government, and the media, in much the same way that the gay community has been victimised, and wants to help in any way he can. He mobilises a very small unit of his peers, and they set about raising money and awareness for the miners plight.

It’s an unlikely partnership-  “Queers” & Miners, and much of the film focuses on the mining communities’ reluctance to be associated with “Perverts”. It’s 1984 remember, and being out and proud was not the same as what it is today.

What makes the film work, and the story so inspiring, is that a handful of people in the mining community are so grateful for the offer of assistance – of not just fundraising, but solidarity, that they embrace the “gays” and together they fight against what must have been a hellish period for those communities.

Paddy Considine is Dai, one of the few men who take onboard the support being offered, and he is wonderful. So too is The Wire’s Dominic West  and Bill Nighy, but my favourite characters are the old ladies who welcome the LGSM members into their hearts and homes, and provide much of the comedy as they are keen to learn more about their unconventional bedfellows. For me it’s Imelda Staunton and Jessica Gunning who steal the movie as Hefina and Sian, two of the pluckiest chicks in any recent movie.

The climax of the film brought tears streaming down my face as the LGSM support is returned down the track by the mining community in an unlikely way.

The soundtrack is absolutely first class too and will bring back fond memories for those who were dancing in the early 80’s.

This is an absolute pearler of a film, and will have you laughing, crying, and thinking about what we can do for our fellow man in times of struggle.