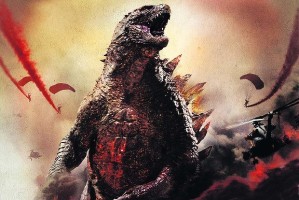 At 107 metres tall, this year’s Godzilla is the tallest incarnation of the famous Japanese creature yet. Playing the lead in his 30th feature film, he’s a handful of flicks ahead of super spy James Bond who sits at 25 features.

When the original Godzilla film was released in 1954, it’s themes reflected the unimaginable horror inflicted on the Japanese population with the dropping of atomic bombs in 1945. With Godzilla as a metaphor for America and it’s Nuclear Weapons Program, the film sought to make a point about the perils of disregarding man’s impacts on nature as we pursued more powerful weapons.

An enormous radioactive monster on a rampage to destroy Tokyo? Much more than just a movie about giant monsters.

So what can Gareth Edwards bring to yet another instalment of this skyscraper terrorising beast?

He has chosen to return to a storyline that uses Godzilla as a backdrop to the theme of man’s folly in playing with atomic energy. At play is a bigger drama than a big lizard on the loose –  the locating and disarming of a nuclear bomb that has been lost in San Francisco in the scramble to destroy the menacing reptile.

The film is visually spectacular and astoundingly silly. There are some fantastic hints too about who might join Godzilla on-screen as we build and build to the reveal of the star attraction almost exactly one hour into the film.

When he does finally show himself, it’s worth the wait. But he’s not the first huge monster to appear in this film.

I won’t say any more because I know I like to be surprised when I see a movie and I don’t like people telling me what I can expect.

Fans should delight in a Godzilla that is return to form from his glory days, and this blockbuster may well also win over a new generation of young fans.