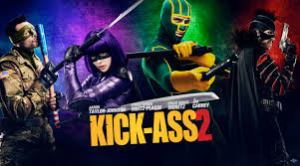 Here’s a movie that struggles with its identity much like the superheroes it deals with.

The first Kick Ass, based on a comic book was a surprise hit that returned a profit through DVD and iTunes following it’s cinema release in 2010, the sequel sees Hit-Girl come to terms with the loss of her father, played by Nicolas Cage in the first Kick Ass, and the usual perils of adolescence – peer groups, boys and independence.

I really wanted to like this film, because it feels like an alternative to the usual superhero fare. Here are people who dress up as superheroes, but they’re actually just regular people.

Unfortunately this sequel is clunky and doesn’t know if it wants to be an action flick or a coming of age teenage drama.

And so it flips between the two, and surprisingly the dramatic moments outshine the action, which seem un-necessarily violent.

So much so that Jim Carey, whose star power replaced Nicolas Cage as a box office magnet withdrew his support of the film after seeing the final cut.

Ultimately it adds nothing to he original Kick Ass, but could be a good movie to see with mates if you’re a teenager. Not sure that it is a suitable date movie…