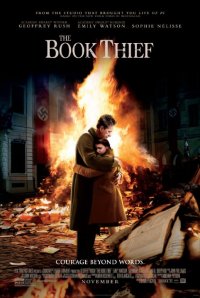 Hmmm. What to make of this film that explores the life of a refugee girl in Germany throughout World War II?

We first meet Liesel (Sophie Nélisse) on a train with her mother and young brother on the way to adoption in Germany in February 1938.

It is on this trip that we are also introduced to the subject of Liesel’s life-long love affair – Books, as well as the film’s narrator – Death (Roger Allam who gets bonus points for appearing briefly in Game of Thrones) .

Filthy, illiterate and starving she turns up on the doorstep of her new “parents” Hans Uberman (Geoffrey Rush) and his wife Rosa (Emily Watson).

Rosa is the personification of a frosty, abrupt, Germanic woman, while Hans is a more kindly soul who takes a shine to Liesel and slowly teaches her to read.

It’s not long before a young boy, Rudy, arrives at the front door to take Liesel to school.

This blossoming friendship between Rudy (Nico Liersch) and Liesel is in stark contrast to the snowballing idealistic fervour brewing in Germany at the time.

Of course it’s this rise of Nazi Fascism that is responsible not only for Liesels’ estrangement from her mother, but also the fate of the people of the German town where she now lives.

This is a story about being human in the face of unimaginable horror.

And in this film adaptation of the enormously popular book “The Book Thief” by Markus Zusak and written for the screen by Michael Petroni, the threats of the German soldiers are more hinted at than demonstrated.

For a film about a refugee living in Nazi Germany in the Second World War, it is very light on the actual terrors thrust upon the Jewish population.

When a young Jewish Man, Max (Ben Schnetzer) turns up in the middle of the night seeking shelter, Hans agrees to hide him in the basement and the family do their best to nourish him and bring him back from the brink of death.

From here on in things get grimmer for poor Liesel , and her only refuge is in the library of the Buergmeister, whose wife Isla (Barbara Auer) provides some escape from the bleak life outside the pages of books.

From my initial immersion in the story I began to lose interest because it didn’t feel like much was happening.

The is an enormous volume of silence and space in the film, despite the suffocating confines of the tiny house and even tinier basement where Liesel spends much of her time.

By the end I was disliking the film as I was desperate for any kind of action to take place.

When bombs begin to fall on the village, Liesel comforts the others taking shelter by telling stories, a natural progression from reading stories to retelling them before going on to create stories of her own.

Definitely not my cup of tea, but beautiful performances from the kids as well as Rush and Watson.

Ultimately far too benign for my tastes, and inexplicably steering well clear from exploring the Jewish faith and the true brutality (both psychological and physical) that the monsters of the Nazi party dished out.