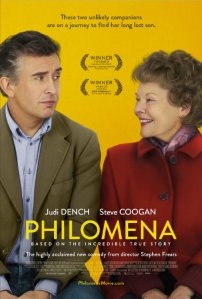 Joining the likes of Ben Stiller and Martin Freeman at the Boxing Day Box Office, is another funny man playing it straight – Steve Coogan. With 2013 showcasing his many talents on screen including “What Maisie Knew“, “Despicable Me 2“, and  “Alan Partridge Alpha Papa”, he’s saved his best for last.

On a different tack entirely from a film like Frozen, here’s a film to take any kids you may have adopted to see, as well as several boxes of tissues.

Philomena Lee, played here by Dame Judi Dench, was a teenager when she fell pregnant in the 1950’s and was sent to a convent in Ireland to give birth and live out of sight of the shame she would otherwise have brought upon her family.

What happened to her son and thousands of other young mothers is utterly confronting and hard to believe.

But this is a true story based around the book The Lost Child of Philomena Lee written by UK journalist Martin Sexsmith – played by Steve Coogan, who also co-wrote the screenplay.

Thank heavens for his touch too, because he manages to not only pump the script full of humour – albeit generally black humour, but he also plays his role as straight as he has ever played it.

He lets Philomena get in the funny lines and he maintains the brusque journo facade, writing a “human interest” story purely for a pay check ,a after losing his coveted job ion the BBC newsroom.

The less you know about this film the better, because I don’t want to surprise any of the twists.

If nothing else see it for the incredible chemistry between Dench & Coogan in what could be the roles of their lives.

The Academy Award for Best actress will be fought between Dench, Blanchett, Thompson and Bullock. So make sure you see what all the fuss is about. Be warned -this is a gut wrenching tale not for the faint hearted.