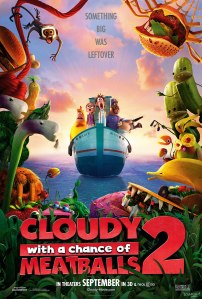 Here’s a film that owes a debt to the absurdist pioneers of comedy in the 20th century. Imagine if Monty Python met The Muppets and made Avatar via The Lorax. Then you’d be 10% of the way towards the Technicolor silliness that is Cloudy 2.

With no spare second to take your eyes off the screen this is an animated treat that offers fresh reward for every repeat viewing.

The Hollywood phrase “From the people who brought you…” can often end in disaster. In this case it’s those guys who made Shrek. Remember how that was actually really, really good? Plus original and funny –  before they just about wrecked the poor Ogre with sequels?

Those guys are back following on from the 2009 film just 8 minutes after we left off and have painstakingly created a digital world that feels organic and the colours. Oh.My.God. They are UNBELIEVABLE. The machine from the first Cloudy is back –  Flint Lockwood‘s FLDSMDFR. –  but this time instead of an all you can eat buffet, it’s pooping out little “food crossed with animal creatures” called “Foodanimals“.

Shrimpanzee. Check. Hipotatomus. Check.Double Bacon Cheespider. Check. And the list goes on. If there’s a wacky food related pun you can think of it’s probably in this film.

Throw in baddie in the form of a mad inventor (similar to Professor Farnsworth from Futurama,) –  a power-mad master of an Apple/Google hybrid corporation Live Corp hell-bent on releasing an update to his hugely popular FoodBar and you have a great movie villain.

With several “father/son, follow your heart, does he get the girl” riffs throughout there’s something for everyone.

Like Mark Mothersbaugh? Not only did he do the music for the first Cloudy film, Devo and Yo! Gabba Gabba, he’s onboard for this mighty ride too.