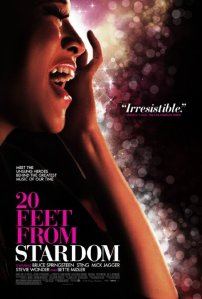 Having finally watched the David Bowie doco this week – Five Years, it was great to see him pop up in this film alongside Sting, Bruce Springsteen,Stevie Wonder, Mick Jagger, Bette Midler and Sheryl Crow.

Luther Vandross sang back up vocals for Bowie in 1975 before going to become a star in his own right.

But as this documentary reveals, there is a wealth of talent out there who never get recognized, acknowledged or rewarded.

Some of the back up singers in the doco are comfortable with living out of the spotlight, but some of them tried to have careers of their own, and like any great soul record there is plenty of heartbreak in this film. – Lets take a look.

I have to say both The Hunger Games and 20 feet from stardom are movies I plan to see more than once. This one I’ll revisit over and over to pay tribute to the voices that form part of forty years of memories.

This is an essential piece of cinema for any fan of popular music.