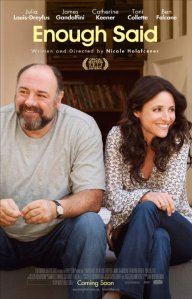 Featuring two actors whose previous roles turned them into television icons – cementing their identities as Tony Soprano from HBO’s The Sopranos and Elaine Benes from Seinfeld.

James Gandolfini plays Albert – a divorced father of a daughter about to leave for college.

Julia Louise Dreyfuss plays Eva, A divorced mother of a daughter about to leave for college.

They meet at a party – she is a masseuse and he works at a television library – perhaps a nod to the enormity of their previous on screen personas.

This is a gorgeous story where the big twist is known to audiences before seeing the feature – spoiler alert – Eva starts massaging a woman  – Marianne – who guess what turns out to be Albert’s ex wife.

As Eva says in the film – she’s like a human Trip Advisor – if you could avoid staying the night in a dodgy hotel – wouldn’t you? GRAB

It’s a story of loneliness and love and isolation and compromises and partnerships and expectations – it’s a story about real life for people who are probably forty plus, have teenage kids and have been previously married – guess what – that’s me.

This film just spoke to me. It unfolds exactly as you want it to – except for the fact that Eva can’t bring herself to reveal that she’s worked out Albert and Marianne were partners. In turns she affects the relationships she has with both these characters. It’s the revelation we are waiting for throughout the film – and when it finally comes it’s a cracker.

I have such a soft spot for James Gandolfini that I adored seeing his face on a big screen in a major role. Being directed by a woman I felt brought a warmth to his performance that uncovered another side to his personality. And Julia was perfectly believable as a divorced 40 something masseuse struggling to come to terms with a looming empty nest.