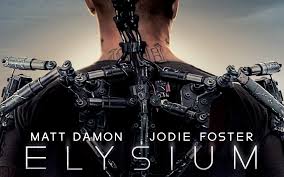 150 years in the future the world’s super rich live on Elysium, a luxury gated community who want for nothing floating in space. Back on Earth the remaining 99% of us are either in prison, on parole, on medication or work in third world conditions for huge corporations.

It’s a popular theme for science fiction and Elysium is the product of every concept the human race has had in relation to the cost of utopia.

Yes we can build a better life, but only for some, at the expense of many.

Referencing every classic piece of science fiction from the last half century including George Lucas’s THX 1138, Star Wars, Soylent Green, Terminator, Alien, Total Recall, and The Matrix movies, the storyline touches on so many social issues but manages to remain as Matt Damon put it at the premiere this week – a popcorn blockbuster. Albeit one that includes illegal immigrants and refugees, the distribution of wealth, universal access to health care, human rights, surveillance, drones, downloading, incurable disease, Coding, our future in space, the environment, corporate criminals and ruthless power, parole and the cycle of poverty and crime that leads people to prison.

I anticipated something great after re-watching District 9 this month, and neither the writer/director Neil Blomkamp nor the stellar cast lead by Matt Damon and Sharlto Copley let me down.

An absolute classic in the library of cinema, 5.

Earth without an environment

Directed by Rawson Thurber who wrote and directed Dodgeball.

Family getaways have long been the source of amusement for Hollywood screenwriters from National Lampoon’s Family Vacation to the recent The Way Way Back.

In this movie the twist is that The Millers aren’t really a family.

They’ve been put together by Jason Sudeikis drug dealing character to get him out of a jam and help him smuggle a campervan full of drugs across the border from Mexico into the US.

I found the humour to be crass and mean which is a common theme from the recent Sandra Bullock movie The Heat, and This is the End.

This is illustrated by an outtake in the closing credits where the cast pranks Jennifer Aniston with a “Friends” gag. Cruel.

As Blake Howard said on radio this week, it’s “way funnier and entertaining than it should be.”

Mindless, brainless fun for those needing to switch off from a hectic life.